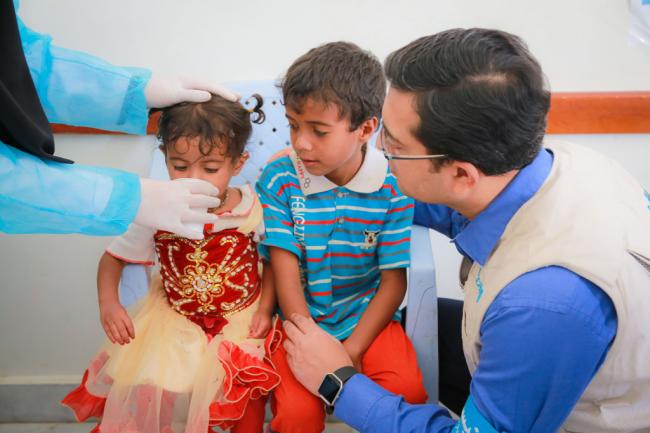 “Health, water and sanitation personnel – who have not received salaries in over ten months – have been working tirelessly to stem the outbreak,” UNICEF said.

Since April, more than 550,000 cases of cholera have been suspected, more than half of them children.

The UN agency praised “massive collective efforts” to treat the sick and improve water and sanitation for slowing down the disease.

“We had difficulties managing the number of patients that came to us – many of them with severe conditions,” Nahla Arishi, Deputy Manager and Head of the cholera treatment center at Alsadaqah Hospital in Aden City, told UNICEF. “The hospital is crowded and beds and essential medicines are in short supply. But I can't close the hospital's doors and not accept children because there aren't enough beds – I am a doctor and a mother too.”

A nationwide cholera awareness campaign is currently underway, mobilizing over 40,000 volunteers going house-to-house and reaching over 2.7 million families so far – approximately 80 per cent of households in Yemen.

“Many of the children I have visited in their homes are thin and weak,” Muthab Alburaik Salem, a community health volunteer working on the campaign, told UNICEF.

“It's crucial to spread awareness among vulnerable communities so they are spared additional suffering. I fear that my own children will be exposed to diseases – so I treat all children I'm working with in Yemen as if they were my own,” adds Muthab, a mother of two.

Despite these recent gains, the fight against cholera is far from over, UNICEF cautioned.

“Amid continued violence, water and sanitation systems are collapsing, and more than half of Yemen's health facilities are out of service,” the agency said, noting that almost 15 million people are cut off from safe water and access to basic healthcare.

In addition, the country remains on the brink of famine, with an estimated 385,000 children suffering from severe acute malnutrition, putting them at heightened risk of acute watery diarrhoea and cholera.

In on Monday's statement, the UN agency reiterated its calls to end the fighting, urging all parties to the conflict to find a peaceful political solution to the crisis.