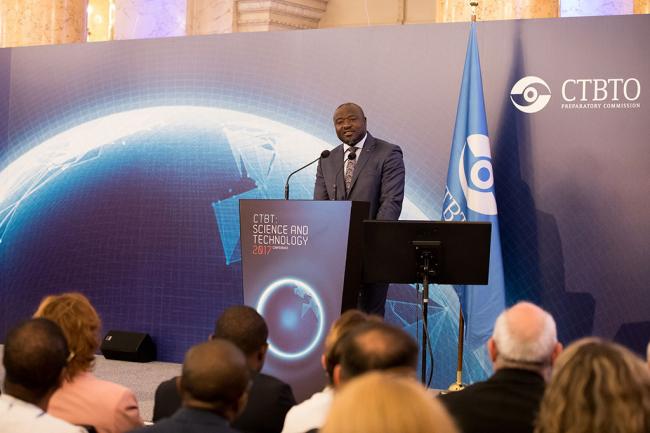 “[Science] is also vital for making progress on other global challenges, such as disaster risk reduction and mitigation, climate change, and sustainable development,” Lassina Zerbo said in remarks to the high-level opening of the Science and Technology 2017 Conference, adding: “This is the message that I want you to take away from this Conference: Collaborative science for peace and development.”

The Conference is the sixth in a series of meetings aimed at strengthening the relationship between the scientific community and authorities for compliance with the Comprehensive Nuclear-Test-Ban Treaty (CTBT). Taking advantage of the presence of scientists and leaders of numerous countries, Zerbo urged moving from rhetoric to action for a breakthrough to make the treaty into law.

The instrument, which bans all nuclear explosions, by everyone, everywhere, has not yet entered into force despite having been opened for signature and ratification 21 years ago. Adopted by the UN General Assembly in 1996, the CTBT is nearly universal with 183 signatures and 166 ratifications.

But 44 nations, including eight nuclear weapon States – China, Egypt, India, Iran, Israel, Democratic People's Republic of Korea, Pakistan and the United States – are still missing. The last country to ratify this treaty was Indonesia, on 6 February, 2012.

The Democratic People's Republic of Korea is the only country that has broken the de facto moratorium in recent years, carrying out five tests, in 2006, 2009, 2013, and two in 2016.

Since the Treaty is not yet in force, the CTBTO is officially called the Preparatory Commission for the Comprehensive Nuclear-Test-Ban Treaty Organization. In line with its main task to make preparations for effective implementation of the Treaty, the CTBTO is establishing and provisionally operating the 337-facility International Monitoring System (IMS) to monitor the planet for signs of nuclear explosions, and including its International Data Centre (IDC) and Global Communications Infrastructure (GCI).

Zerbo said he hoped that the scientific community will become a catalyst for inspiring diplomatic actions leading to the CTBT's entry into force.

Indeed, he warned that the status quo is not secure enough in an unstable geopolitical climate. “To bring the CTBT into force we must insist on action over words,” he said, noting that scientists from all but one of the so-called 'Annex 2' States – those that must signs and ratify the treaty –are participating in the Conference “and working together to refine the CTBT verification regime.”