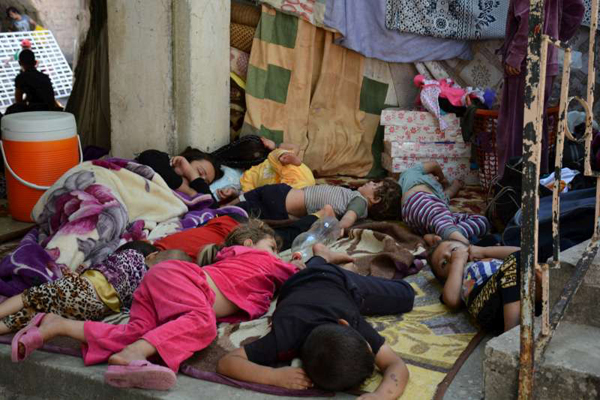 “The reports we have received reveal acts of inhumanity on an unimaginable scale,” Flavia Pansieri, the Deputy High Commissioner for Human Rights, said in her opening remarks to the UN Human Rights Council's special session on Iraq.

During the session, the Council adopted a resolution requesting the Office of the High Commissioner for Human Rights (OHCHR) to urgently dispatch a mission to Iraq to investigate alleged violations and abuses committed by the so-called Islamic State in Iraq and the Levant (ISIL) and associated groups.

The 47-member body, based in Geneva, also strongly condemned in particular all violence against persons based on their religious or ethnic affiliation, as well as violence against women and children.

In her briefing,  Pansieri said that the OHCHR team in Iraq continues to gather strong evidence that serious violations of international human rights and humanitarian law have been committed in areas under the control of ISIL and associated groups.

This includes targeted killings, forced conversions, abductions, slavery, sexual and physical abuse and torture, and the besieging of entire communities on the basis of ethnic, religious or sectarian affiliation. Mosques, shrines, churches, and other religious sites and places of cultural significance have also been deliberately destroyed, she reported.

“The effect of the ongoing conflict on the children of Iraq has been catastrophic,” said  Pansieri, noting that many have become direct victims of the conflict, while others have been subjected to physical and sexual abuse, whose scars may remain with them throughout their lives.

“Children belonging to ethnic and religious communities targeted by ISIL have endured particularly extensive violations of their rights,” she added.

Christian, Yezidi, Turkmen, Shabak, Kaka'e, Sabaeans and Shi'a communities have been targeted through “particularly brutal persecution,” as ISIL has ruthlessly carried out what she said may amount to ethnic and religious cleansing in areas under its control.

“The full extent of casualties is difficult to determine. Many have been killed directly; others have been besieged and deprived of food, water or medication,” she stated.

Pansieri also voiced concern at the situation of civilians who remain in areas under ISIL control, particularly in cities such as Fallujah, Ramadi, Tikrit, Tal Afar and Mosul.

“Their living conditions are intolerable. Medical facilities lack medicine and basic supplies, and health sector employees have not received a salary for months. Reports indicate a near-total breakdown in rule of law and an increase in criminality in Mosul and other cities. This insecurity compounds the difficulty for the civilian populations to access essential services.”

OHCHR has also received reports that in recent months the Iraqi Security Forces (ISF) and anti-ISIL armed groups have perpetrated violations of human rights and humanitarian law that may amount to war crimes, the official noted.

“I am profoundly concerned at the grave impact the current conflict is having on civilians, including children and people from Iraq's ancient and diverse ethnic and religious communities. Systematic and intentional attacks on civilians may constitute war crimes and crimes against humanity. Individuals, including commanders are responsible for these acts.”

Leila Zerrougui, the Secretary-General's Special Representative for Children and Armed Conflict, told the Council that the most reported violation by ISIL was the killing and maiming of children: 693 child casualties have been reported since the beginning of the year.

There are also reports – both verified and as-yet unverified – of children, especially young boys, being executed by armed opposition groups, including ISIL; of schools and hospitals being destroyed; and of young girls from minority groups being abducted for the purposes of sexual violence and forced marriage.

“The images that we see through media reporting of indiscriminate and brutal killings of civilians, including children is deplorable,” she stated.

“While violations against children have sadly been a consequence of the instability in Iraq over the years, the impact of the armed violence on children has reached unprecedented levels during the current crisis.”

Of grave concern, she noted, are the continued reports on child recruitment and use. Children continue to be recruited by armed opposition groups, including ISIL and affiliated entities, and used as informants; for patrolling and for manning checkpoints, and in some cases as suicide bombers.

Also briefing the Council was Chaloka Beyani, the Chairperson of the Coordination Committee of Special Procedures and Special Rapporteur, who noted that an estimated 1.5 million Iraqis had been internally displaced to date and over the past weeks over 250,000 members of religious groups had been forced to flee their homes. The international community must be prepared for a rapid escalation in the humanitarian crisis as the conflict continues, he added.

Beyani stated that the Coordination Committee of the Special Procedures joined their voices to those who stressed that atrocities by ISIL currently ongoing in Iraq appear to amount to war crimes and crimes against humanity and reveal a risk of genocide.

Members of an ethnic Yezidi family sleep in the shade in Shekhadi village, Iraq, after fleeing Sinjar. Photo: UNHCR/N. Colt