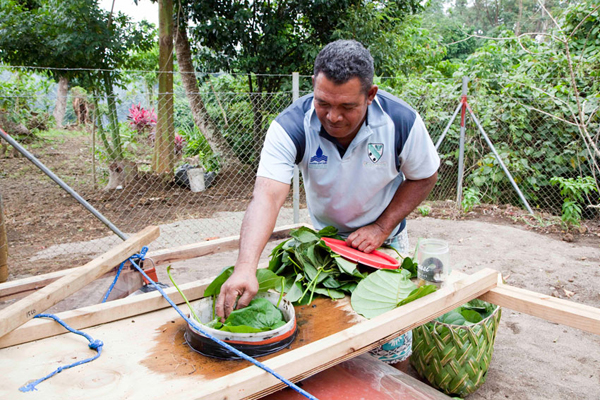 India Blooms News Service | | 30 Aug 2014, 11:15 am
#Samoa, # UN Development Programme
New York, Aug 30 (IBNS) A toxic weed in Samoa is being turned into electricity, raising hopes that families on the southern coast of the Pacific island can be connected to the national grid as a result of a partnership between the Government and the United Nations.

“This is the first time ever in Samoa that you produce electricity from biogas,” said Mina Weydalh, Energy Analyst and acting head of the energy unit at the UN Development Programme (UNDP) office in the country. “It's not a new technology. They do it in Europe, and they do it in China. But it's new in Samoa.” To showcase the bio-fuel partnership, delegates at the Small Island Developing States (SIDS) conference set to begin on Monday in the Samoan capital, Apia, will be riding around in 15 six-seater electric carts partially fueled by organic waste. The project is run by UNDP, along with Samoa's Ministry of Natural Resources and Environment (MNRE) and the Secretariat of the Pacific Regional Environment Programme (SPREP). “The system we have here is not big enough to power all those golf carts completely but we are going to give them a little top up,”  Weydalh told the UN News Centre standing next to a cart that was being charged from a biogas digester. Reminiscent of a large white propane tank, the biogas digester breaks down organic waste through a fermentation process that does not use air. The methane is then fed into a generator to produce electricity. In the southern coast village of Piu, plans are underway to use this same technology to build a much larger bio-digester that can provide power for six families. Additional energy can be sold back to the national grid, generating income for the community. The project is part of the regional Pacific Island Greenhouse Gas Abatement through Renewable Energy Programme (PIGGAREP). Funded by the Global Environment Facility (GEF), the project is now supporting Piu to build and manage a power station fuelled entirely by local organic waste. The Danish Government, added another $3 million to be used by Samoa and eight other countries in the region. “This project is quite interesting because we are going to use a vine, it's called the Merremia vine. That is an evasive vine to Samoa and, if you go out to the outer areas of Samoa, you'll see it covers everything,”  Weydalh noted, describing a type of 'Morning Glory'. The vine is blamed for killing more than 60 per cent of Samoa's forests. But as biomass, it could be fuel for bioenergy. “The goal is to demonstrate the viability of biogas solutions on the island, while at the same time stopping the spread of the invasive vine,” UNDP has said. Samoa, like many other Pacific island states, is very heavily dependent on generators that run on either diesel or petrol, and which have to be shipped to the island. The country imports up to 100 million litres of petrol per year, of which nearly half are used for transport, according to official figures. Seventy per cent of the power consumption in Samoa comes from fossil fuel, according to the UN agency. Most of the remaining 30 per cent is hydro power. “Samoa is lucky because they have a little bit of mountains,” said Weydalh, “but many of the island states are flat. They're atoll, so they don't have any hydro because you need a little height difference to do hydro.” Biogas, then, offers potential for development in small island developing states, particularly at the community level. Whereas wind or hydropower systems can be large generating thousands of megawatts, bio-fuel systems such as the one being demonstrated the UN conference is “something that a smaller village or a smaller household in the community can invest in,” the energy expert noted. She added that the price of one kilowatt hour in Samoa is roughly an “extremely expensive” 45 cents, as compared with the rest of the world. As the UN conference on small island developing states officially kicks on Monday, the carts run on bio-fuel are meant to be reminders of successful partnerships and how to expand them. “This can produce electricity,”  Weydalh said. “That's what we're demonstrating here, to get people talking.”

The biogas digester breaks down organic waste through a fermentation process that does not use air. The methane is then fed into a generator to produce electricity. UNDP/Abril Esquivel