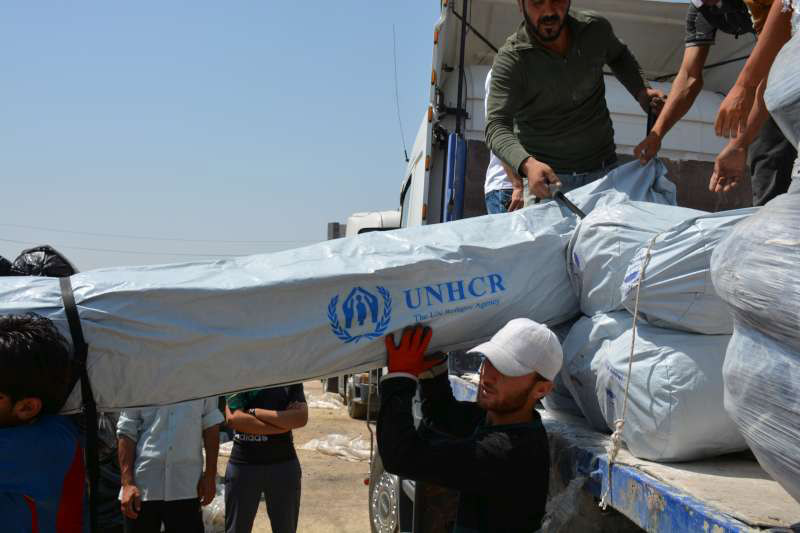 “[ISIL] is systematically targeting men, women and children based on their ethnic, religious or sectarian affiliation and is ruthlessly carrying out widespread ethnic and religious cleansing in the areas under its control,” said UN High Commissioner for Human Rights, Navi Pillay, in a statement to the press.

The violations include targeted killings, forced conversions, abductions, trafficking, slavery, sexual abuse, destruction of places of religious and cultural significance, and the besieging of entire communities because of ethnic, religious or sectarian affiliation.

Pillay said among those directly targeted have been Christians, Yezidi, Shabaks, Turkomen, Kaka’e and Sabaeans.

In Nineveh Governorate, hundreds of mostly Yezidi individuals were reported killed and up to 2,500 kidnapped at the beginning of August. Of those who refused to convert, witnesses report that the men were executed while the women and their children were handed over to ISIL fighters as slaves.

Similarly, in Cotcho village in Southern Sinjar, ISIL killed and abducted hundreds of Yezidis on 15 August. Reports indicate, again, that the male villagers were killed while women and children were taken away to unknown locations.

“UN staff members in Iraq have been receiving harrowing phone calls from besieged civilians who are surviving in terrible conditions, with little or no access to humanitarian aid,”  Pillay said. “One of the women abducted by ISIL managed to call our staff, and told them that her teenage son and daughter were among the many who had been raped and sexually assaulted by IS gunmen. Another said her son had been raped at a checkpoint.”

At least 13,000 members of the Shia Turkmen community in Amirli in Salah al-Din Governorate, among them 10,000 women and children, have been besieged by ISIL since 15 June. Residents are enduring harsh conditions with severe food and water shortages, and a complete absence of medical services – and there are fears of a possible imminent massacre, said  Pillay.

“The Government of Iraq and the Kurdistan region of Iraq, and the international community must take all necessary measures and spare no effort to protect members of ethnic and religious communities, who are particularly vulnerable, and to secure their return to their places of origin in safety and dignity,” said the High Commissioner.

The effect of the ongoing conflict on children is catastrophic, she said. According to interviews by UN human rights monitors with displaced families, ISIL is forcibly recruiting boys aged 15 and above. ISIL has also reportedly been deliberately positioning the boys at the front-line in battle situations, as human shields.

The Human Rights Office of the UN Assistance Mission for Iraq has also verified reports of a massacre of prisoners and detainees in Mosul’s Badoush Prison on 10 June. According to interviews with 20 survivors and 16 witnesses of the massacre, ISIL gunmen loaded between 1,000 and 1,500 prisoners onto trucks and transported them to a nearby uninhabited area,  Pillay said.

There, armed men asked the Sunnis to separate themselves from the others. Around 100 prisoners who joined the Sunni group were suspected by ISIL not to be Sunni and were subjected to individual checks based on how they prayed and their place of origin. Sunni inmates were ordered back on the trucks and left the scene. ISIL gunmen then yelled insults at the remaining prisoners, lined them up in four rows, ordered them to kneel and opened fire. Up to 670 prisoners were reportedly killed.

“Such cold-blooded, systematic and intentional killings of civilians, after singling them out for their religious affiliation may amount to war crimes and crimes against humanity,”  Pillay said.

“I urge the international community to ensure that the perpetrators of these vicious crimes do not enjoy impunity. Any individual committing, or assisting in the commission of international crimes, must be held accountable according to law.”