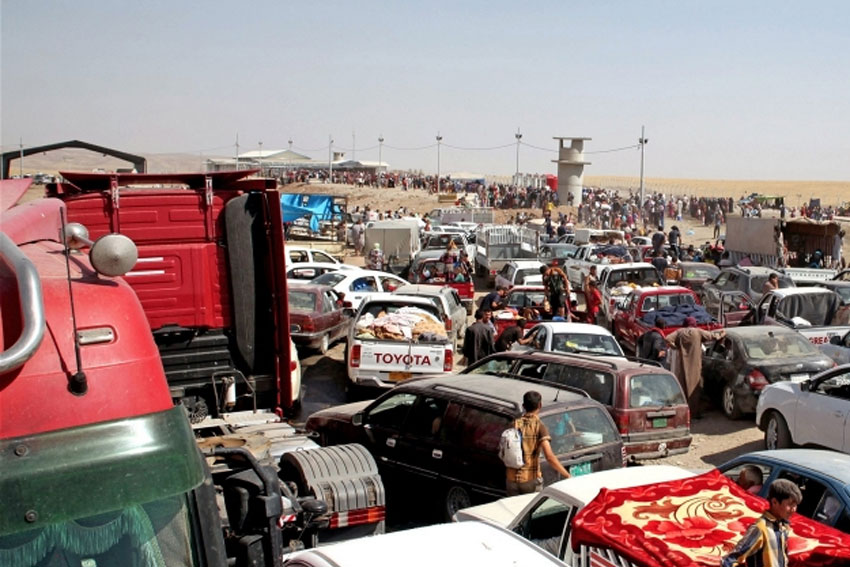 Iraq: US steps up air strikes on militants

Gravely concerned for the physical safety of civilians in northern Iraq and the humanitarian situation in areas now controlled by the group, Islamic State in Iraq and the Levant (ISIL), the United Nations human rights office on Friday called on the international community and the Governments of Iraq and the Kurdistan region to protect people affected by the fighting.

“We are deeply alarmed by the situation in northern Iraq, and in particular the situation of vulnerable minority groups, including the Yezidi, Christian and Turkomen communities,” Ravina Shamdasani, Spokesperson for the UN Human Rights Office (OHCHR) told reporters in Geneva.

She underscored that widespread or systematic attacks directed against any civilian populations because of their ethnic background, religion or belief may constitute a crime against humanity.

OHCHR also voiced concern at “very disturbing reports” about the treatment of women. In specific, Shamdasani said they were told of women being sold as sex slaves, and being punished for not adhering to misinterpretations of Islamic laws.

The agency also had very worrying information about children dying and about the recruitment of child soldiers.

“All parties, including ISIL and associated armed groups, must abide by international humanitarian law, including the obligation to protect the civilian population,” the OHCHR spokesperson said.

The Security Council and Secretary-General Ban Ki-moon on Thursday voiced concerns about the displacement of hundreds of thousands of people as a result of the violence. There are reports of ISIL attacks in Kirkuk, and Qaraqosh, and earlier attacks in Tal Afar and Sinjar district of Ninewa Governorate, affecting mainly the vulnerable communities of Christians, Turkomen, and Yezidis.

The UN World Food Programme (WFP) is coordinating with the UN Refugee Agency (UNHCR) to provide assistance in the northern part of the country. Armed clashes have further exacerbated the situation there, forcing people to flee, including in Erbil city, according to the UN Office for the Coordination of Humanitarian Affairs (OCHA).

“An estimated 50,000 people are believed to be trapped on Sinjar Mountain, and over 200,000 are estimated to have made their way to Dahuk governorate over the past 72 hours,” a UN spokesperson said in New York, stressing that the number of those displaced remains fluid and unverified.

The main priorities for the rising numbers of people fleeing Sinjar, which ISIL took over on Sunday, are water, food and shelter, and there are concerns regarding soaring temperatures, which are next week forecast to hit 111 degrees Fahrenheit.

UNHCR, WFP and the UN Children’s Fund (UNICEF), along with partners, are providing assistance for up to 200,000 people who fled violence in Sinjar last weekend, and who are moving northward to Dahuk Governorate in the Kurdistan region.

Amid ongoing conflict in Iraq, US President Barack Obama on Thursday authorised air strikes against Islamic militants in northern Iraq to help Iraqi forces as well as to protect  American personnel present in the country.

" In recent days, these terrorists have continued to move across Iraq, and have neared the city of Erbil, where American diplomats and civilians serve at our consulate and American military personnel advise Iraqi forces," Obama said on Thursday.

He said: "To stop the advance on Erbil, I’ve directed our military to take targeted strikes against ISIL terrorist convoys should they move toward the city.  We intend to stay vigilant, and take action if these terrorist forces threaten our personnel or facilities anywhere in Iraq, including our consulate in Erbil and our embassy in Baghdad.  We’re also providing urgent assistance to Iraqi government and Kurdish forces so they can more effectively wage the fight against ISIL."

Obama said: "Second, at the request of the Iraqi government -- we’ve begun operations to help save Iraqi civilians stranded on the mountain."

He said :"I’ve, therefore, authorized targeted airstrikes, if necessary, to help forces in Iraq as they fight to break the siege of Mount Sinjar and protect the civilians trapped there."

He said American combat troops will not return to fight in Iraq.