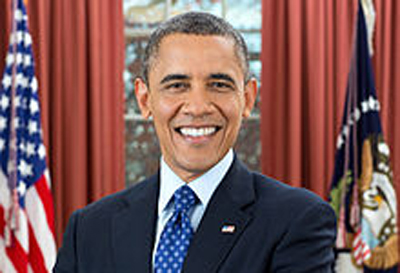 " In recent days, these terrorists have continued to move across Iraq, and have neared the city of Erbil, where American diplomats and civilians serve at our consulate and American military personnel advise Iraqi forces," Obama said on Thursday.

He said: "To stop the advance on Erbil, I’ve directed our military to take targeted strikes against ISIL terrorist convoys should they move toward the city.  We intend to stay vigilant, and take action if these terrorist forces threaten our personnel or facilities anywhere in Iraq, including our consulate in Erbil and our embassy in Baghdad.  We’re also providing urgent assistance to Iraqi government and Kurdish forces so they can more effectively wage the fight against ISIL."

Obama said: "Second, at the request of the Iraqi government -- we’ve begun operations to help save Iraqi civilians stranded on the mountain."

He said :"I’ve, therefore, authorized targeted airstrikes, if necessary, to help forces in Iraq as they fight to break the siege of Mount Sinjar and protect the civilians trapped there."

Obama said the United States 'cannot and should not intervene' every time there’s a crisis in the world.

"When we have the unique capabilities to help avert a massacre, then I believe the United States of America cannot turn a blind eye.  We can act, carefully and responsibly, to prevent a potential act of genocide.  That’s what we’re doing on that mountain," the President said.

Speaking on taking actions, Obama said: "But when the lives of American citizens are at risk, we will take action.  That’s my responsibility as Commander-in-Chief.  And when many thousands of innocent civilians are faced with the danger of being wiped out, and we have the capacity to do something about it, we will take action.  That is our responsibility as Americans.  That’s a hallmark of American leadership.  That’s who we are."

He said American combat troops will not return to fight in Iraq.