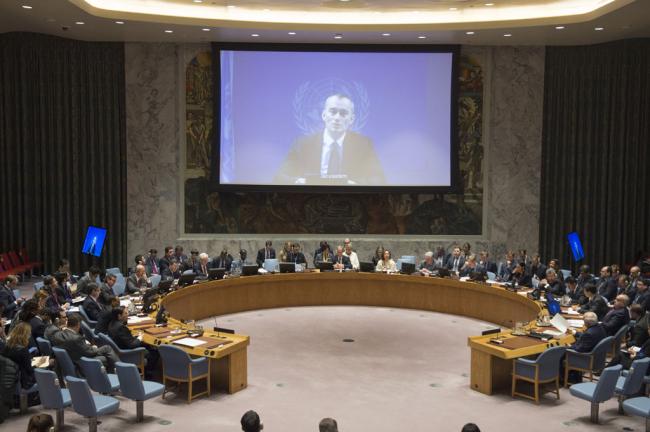 
In his first briefing of the year, Nickolay Mladenov, the UN Special Coordinator for the Middle East Peace Process, told the Council that tensions flared following the December adoption of resolution 2334 (2016). Passed with14 votes for and one abstention, the resolution condemned Israeli settlements in the West Bank and reiterated international support for a two-state solution.

“In the aftermath of the vote, emotions on the ground have been heightened,”  Mladenov said, adding that “divisive positions risk destroying the prospects for peace.”

“All stakeholders must avoid any unilateral action that would prejudge a negotiated final status solution.”

Among other issues raised in his briefing,  Mladenov noted that for the first time in two decades preparations are underway for a regular session of the Palestinian National Council. He encouraged all factions to work towards genuine reconciliation.

Mladenov's briefing followed an international conference this past weekend in Paris, France, where participants reaffirmed their collective support for a two-state solution and readiness to support both parties in returning to meaningful negotiations.

Stressing that opportunities for peace are rare and must be seized, he said that in recent weeks the international community has expressed its continued commitment to the two-state solution. “But resolutions and communiques alone will not achieve a just and lasting peace. What is required is action, first and foremost by the parties themselves.”

Despite some successes in the Gaza Strip, such as an averted electricity crisis, the situation remains tense, the UN Special Coordinator said.

“I remain greatly concerned by increasing tensions in Gaza exacerbated by the continued closures and the protracted humanitarian and development situation,”  Mladenov told the Council members.

“The right to freedom of expression, peaceful protest and assembly in Gaza must be respected fully by all,” said  Mladenov.

The situation in Lebanon has positive signs, the senior UN official said, following the formation of a Government on 18 December by President Michael Aoun and Prime Minister Saad al-Hariri.

“These moves signal cautious optimism and the potential for consolidating Lebanese institutions,”  Mladenov said, noting that the Government outlined its priorities and vision for the country reflecting its determination to tackle key challenges.