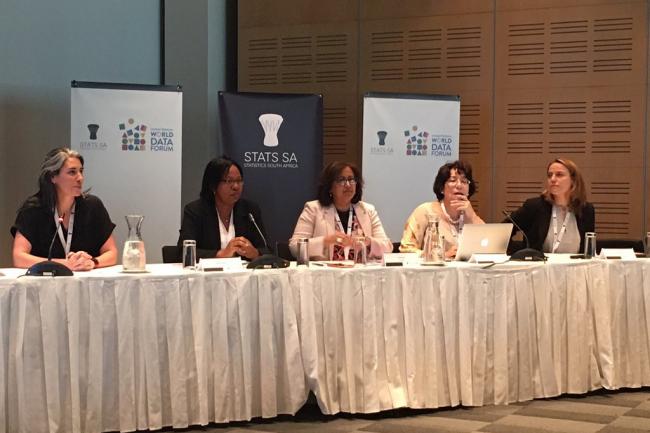 “Gender statistics are critical for setting priorities, planning interventions and assessing their impacts,” Purna Sen, the Director of Policy Division at UN Women, told a panel discussion. “They can put a spotlight on inequality and women and girls who are left behind.”

The panel, titled 'Gender Data for Decision-making: Strengthening the Links,' was among the nearly 100 sessions and parallel events scheduled throughout the 15-18 January gathering in Cape Town, South African, of more than 1,400 data experts around the world.

Sen said that when the 2030 Agenda for Sustainable Development was adopted in September 2015, UN Women, formally known as the UN Entity for Gender Equality and the Empowerment of Women, faced “a hard truth:” difficulty monitoring the overwhelming majority of the gender-related targets.

Noting that the global statistical community has made substantial progress in recent years in the area of gender statistics, including strong normative and technical advances, better coordination, more and better technical resources and innovative programmes, she said that lots of challenges remain.

Gender statistics are often not prioritized because of a number of factors linked to the lack of political will, particularly in politically charged areas such as violence against women that, frankly speaking, can make a government look bad, she added.

Based on the latest data from OECD-DAC, only two per cent of funds for statistical capacity building are dedicated to projects whose principal objectives are to strengthen gender statistics, she said.

“Data are simply not useful if they are not used”

At a high-level event during the 71st session of the UN General Assembly last fall, UN Women launched a flagship initiative on gender statistics, “Making Every Woman and Girl Count,” which aims to effect a radical shift in the availability, accessibility and use of quality data and statistics on key aspects of gender equality and women's empowerment.

The initiative also aims to ensure that data are accessible to all users, including governments, civil society, academia and the private sector, and can be analyzed to inform research, advocacy, policies and programmes and promote accountability.

“Data are simply not useful if they are not used,” she said, explaining that this is the area where capacities are extremely weak and a lot of work and efforts are needed by all stakeholders.

Emily Courey-Pryor, Executive Director of Data2X, who moderated the discussion, said that “we will only be able to truly promote gender equality, alleviate poverty, and advance development progress if we improve gender data.”