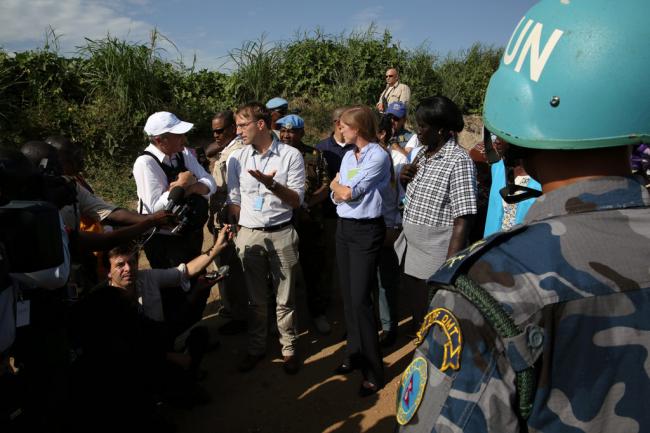 India Blooms News Service | | 15 Jan 2017, 11:26 pm
#UN mission, # South Sudan, # deployment, # regional protection force
New York, Jan 15 (Just Earth News): The United Nations peacekeeping mission in South Sudan has confirmed that it continues its discussions with the transitional national unity Government on a 4,000-strong regional protection force, which was authorized by the Security Council last August but has yet to be deployed.


The UN Mission in South Sudan (UNMISS) “confirms that in preparation for the arrival of the Regional Protection Force, it continues to be engaged in discussions with the Transitional Government of National Unity as to the various modalities for the new Force, including where they will be deployed in Juba,” said a statement issued by the Mission's Office of the Spokesperson.

The confirmation followed various media reports, including those suggesting that the Government may have changed its position on the deployment of the Force.

The Mission's attention has been drawn to recent statements reported in the media concerning the deployment of the Regional Protection Force, said the spokesperson's statement.

“It may be recalled that the United Nations Security Council in its Resolution 2304 decided that UNMISS force levels should be increased to a ceiling of 17,000 troops, including 4,000 for a Regional Protection Force. This was reaffirmed by the Security Council in its recent Resolution 2327, renewing the United Nations Mission in South Sudan for one year,” the spokesperson's statement added.

Further in the statement, the Mission noted that the Transitional Government of National Unity confirmed its “unconditional” consent to the deployment of the Regional Protection Force by communique to the Security Council on 30 November 2016, and in renewing the UNMISS mandate, including the deployment of the Regional Protection Force, the Council reaffirmed that the security situation in South Sudan remains fragile, with serious consequences for the civilian population.

In early July last year, close to the fifth anniversary of the country's independence, the youngest nation was plunged into fresh violence due to clashes between rival forces – the Sudan People's Liberation Army (SPLA), loyal to President Salva Kiir, and the SPLA in Opposition, backing former First Vice-President Riek Machar. That led to deaths and injuries, including many civilians and several UNMISS peacekeepers, jeopardizing the peace agreement between the political rivals in August 2015, which formally ended their differences.