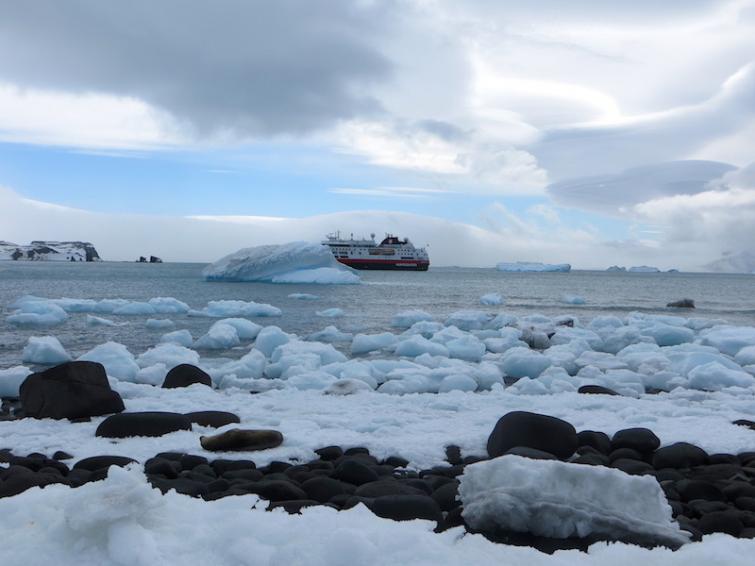 At the southern end of the world. Picture by Ruchira Mandal

Ruchira Mandal recounts her trip to the world's southernmost continent and says Antarctica is a wilderness like nowhere else.

It was far away… a rather small and indistinct structure. But spotting your first iceberg is special. And it was the first of many firsts for me that happened on our trip to Antarctica. But let me start from the beginning.

We reached our Buenos Aires hotel at three in the morning.

It had been a long day with delayed flights and all I wanted to do was sleep. But breakfast was at 5am before the next flight to Ushuaia, Argentina’s southernmost town, from where our ship would depart. Once we got to Ushuaia, we found out the ship would be ready for boarding only in the afternoon. So, we did a bit of local sightseeing before returning to the pier and queuing up to board MV Fram, our ship.

We had barely managed to drop our bags when the ship’s public announcement system came to life and we were asked to assemble on the various open decks for the regulatory safety drill. We learned where the lifeboats were, where to assemble if the alarms sounded and how to put on a life-jacket.

But most importantly, I learned never to come to open deck without hats, gloves and socks again, no matter how desperately tired I were.

Perhaps it was the effect of those icy winds, but once all the action was over, I suddenly wasn’t sleepy anymore. My mother and I explored the ship, settling finally on Level 7 with long, slanted windows and chairs, music and tea for comfortable sea-gazing.

We watched as the mountains of Ushuaia slipped away, and the horizon opened up as a solitary bird braved the waves at dusk. Where was its family? Where was home? Who knew?

That night after dinner, we met the captain of the ship, and more importantly, the Expedition Team, who we would see a lot of in the next two weeks. They were a mixed bunch of highly qualified experts — an ornithologist (expert on birds), a geologist, a couple of veteran adventurers and snow sport enthusiasts, trained travel guides, marine biologists and mineralogists. It was a veritable faculty, and yes, there were daily lectures on Antarctica onboard. Schedules would be announced on the PA system in English and German, and anyone who wished to learn could attend. But first, we needed to get our sea-legs steady.

As the Captain warned us of the dreaded Drake Passage in his welcome address, the calm waters of the evening had already given way to a more restless ocean. From the windows of the seventh deck, we could make out the rising and falling of the waves. When we woke up on our first morning on board, the ship was rocking like a pendulum. It was impossible to walk around without clawing at the walls.

After breakfast (some chose to skip it due to the nausea), I stepped outside in the open deck to breathe in the fresh air, and was dazzled by the sight of petrels and albatrosses gliding along the invisible slopes of the air. Black and white wings against the deep, rich inky blue of the ocean broken by snowy white froth where the waves crashed: all sharply defined colours acquiring a richness far greater than the mundane world I was used to.

Some time during the night, we had left the ordinary familiar world behind, and stepped into a fairytale.

Later that day, we spotted our first iceberg. It was far away, a rather small and indistinct structure, but for us it was a miracle, our cameras failing to capture our amazement. It was the first of many. 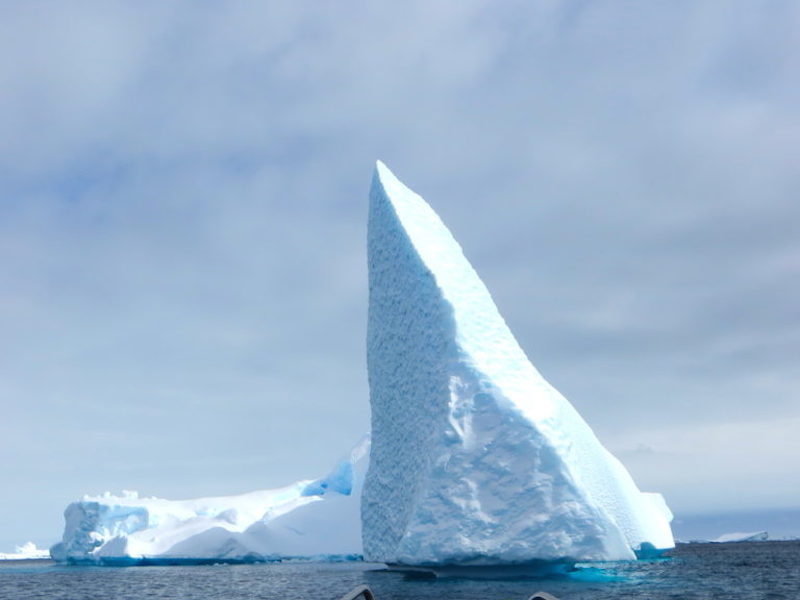 By the third morning, it was smooth sailing. After breakfast, we were called to try on the boots for our landing expeditions, having tried out the water-proof parkas the previous day. We settled into our new gear, vacuumed our pockets and backpacks to make sure we carried no germs or seeds on shore and occasionally popped out onto the open decks to photograph a bird or the blue-white, myriad-shaped icebergs which were now appearing with increasing frequency.

On the lounge on the seventh deck where most of us hung around, there was tea, coffee, cakes and the pleasant aroma of anticipation.

Antarctica was, as John Chardine, the resident ornithologist explained in the compulsory orientation class held that afternoon, wilderness like we had never seen before, and it had to be protected.

We received practical training — a demonstration of how to dress, and were made to memorize a ton of rules:

1. Keep to the paths marked by red flags. Do not wander off on your own.
2. Do not take anything from the continent — not even a blade of grass or pebble or moss, for one minute speck could contain a huge ecosystem.
3. Do not leave anything behind. No flags, scarf or even a cigarette butt.
4. Do not touch or approach any bird or animal. If approached by one, stand and let it pass. In Antarctica, the penguin has the right of way.

All these and more were together a set of rules that were part of the International Association of Antarctica Tour Operators agreement. 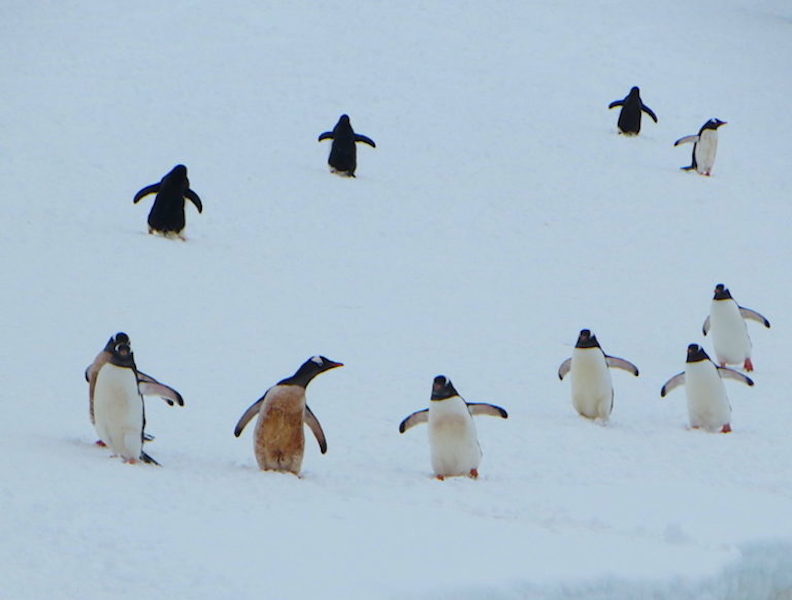 Our first close-up view of Antarctica happened that afternoon when we passed the Elephant Islands. There was rain and snow but we all scrambled to the open deck to take pictures of the glacier and the penguins dotting the vanilla slopes. Later, the Expedition Team arranged 30 minutes of zodiac (air-filled rubber boat) cruising for everyone. We sailed passed stunning blue-white icebergs, exclaiming at seals and penguins while trying to handle cameras without taking off our gloves. It was a magical half hour.

Reward beyond all riches

Soon we fell into the rhythm of the Antarctic routine. Waking, showering, breakfast, waiting for announcements. Then the layers: thermals, woollens, jackets, waterproofs. Waiting for our boat group to be called, then going down to the armoury to don our shields and weapons — wriggling our feet into the boots was a challenge, taking them off proved an even greater one — and the lifejackets had far too many straps.

Filing out in single queues to the boats, we felt like medieval soldiers walking out of castle doors. Into battle we go. Except that the battle was with ourselves, and the reward beyond all riches.

Boarding the polar circle boats from Deck 2, we would arrive at the landing site where the expedition team would be waiting to brief us on the hiking routes. The terrain was slippery, but those muck boots had good grip, and we mostly managed, taking a few falls in our strides. Sometimes the snow needled our faces, sometimes we sweated beneath all those layers, and sometimes the wind was so strong that one feared toppling off the slopes and into the sea.

The penguins mostly minded their own business, sometimes wobbling like little people, sometimes crawling, sometimes simply resting. A curious few advanced near enough to check us out. We saw Adelies with fully black heads, the Gentoos with white stripes on the top of their heads, the Chinstraps with the black stripes below the beaks and the occasional Macaronies with their yellow crest feathers.

There were seals sunning themselves, sheathbills as white as the snow, and skuas that hunted as if we were invisible. The silent snow-song enchanted the soul, and we drank in.

At Arctowski, we saw the Polish research centre. Neko, Cuverville and Half-Moon islands provided great views from the top. At Deception Island encircling Whalers’ Bay, where the water was warm, some adventurous souls decided to go swimming. I wasn’t brave enough.

At Danco Island, we encountered a blizzard and the world went white and opaque. I had taken my own pace on the hike and suddenly, I was alone, middle of nowhere, my glasses fogged up, my face frozen, the ship and the penguins hidden by the snow curtain, and the cold wind was like a living, moving, wrestling wall.

After what felt like an eternity, I managed to reach the top. Waiting for me there was a magnificent, unbelievable view of a glacier. I could have stared forever, but time was limited. By then it had stopped snowing and the island, along with the surrounding ocean with our ship in it had shifted back into focus. But the paths were gone. Fresh snow had made them disappear. After trying to trudge through knee-deep snow, I decided to slide down the slopes and eventually reached level ground.

When we were not on land, we watched the sea from the ship. There were icebergs in so many shapes and sizes — tables, gateways, boats, abstract art, the blue underwater ice-chunks making the sea look like spilled ink. Films of ice covered the almost frozen sea, little pieces of ice scattered over still waters like diamonds. Snowflakes fell in Brownian motion — each flake seemingly weaved to the others through some invisible material, making the world shimmy through the glass windows, turning the tables and deck chairs outside into Christmas cards.

We reclined on the lounge-chaises with a book and warm drink in our hands, and gazed at the Antarctic “wilderness” that was “paradise enow” [Omar Khayyám: ‘Here with a loaf of bread beneath the bough’, trans. Edward Fitzgerald]. The whales loved playing hide-and-seek, dipping on the starboard to rise on the portside, and we chased them on the freezing deck with hastily pulled jackets.

Later on, we encountered the frozen ocean as our ship cut through the ice. Everywhere we looked, the sea was endlessly white. We were at the forgotten edge of the world.

End of a dream

We had a second cruising in the magnificent Lemaire Channel amidst huge, majestic icebergs that could have only been sculpted by a race of giants from the age of fables, now forever gone from the world, leaving behind only the remains of their former homes. It was a dream, and dreams end, and so one fine morning we arrived at Port Lockroy for our final landing in the world’s southernmost continent. This British island had a post-office and a museum about the earliest explorers, and penguins and sheathbills as usual.

Our return journey from Antarctica began. Icebergs became less frequent, the sea unfroze and the slanted window panes of Deck 7 cleared of melting snowflake. We had gotten used to beauty, and now beauty had passed and as the melancholy set in, we realized how much we had taken for granted. How much we take for granted every day for the last complete wilderness to be so far out of man’s life.

The dreams lay behind, we returned to the world.

(This article first appeared on TRAVELANDYNEWS.COM)