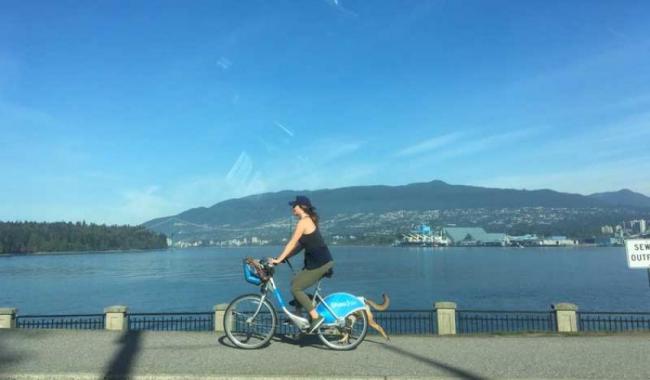 Vancouver is your greenest city to visit in 2019

While Indian metros reel under unprecedented air pollution, Sujoy Dhar checks out the western Canadian city of Vancouver that has set the sanest target by 2020: to emerge as the world's greenest city for locals and tourists

Not many know that of all the urban hubs in the world, Vancouver in western Canada's British Columbia province has the longest uninterrupted waterfront path. We are talking about the 28 km Seaside Greenway of Vancouver which is a pathway that is crowned by the famous Stanley Park Seawall, extending from the Vancouver Convention Centre to Spanish Banks Park.

Vancouver is a coastal, seaport city sitting pretty on the western half of the Burrard Peninsula, bounded to the north by English Bay and the Burrard Inlet and to the south by the Fraser River. Vancouver Island, across the Strait of Georgia, shields Vancouver from the Pacific Ocean. 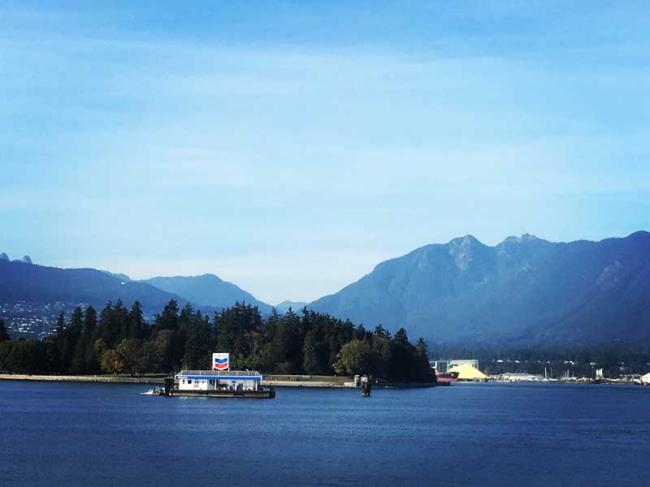 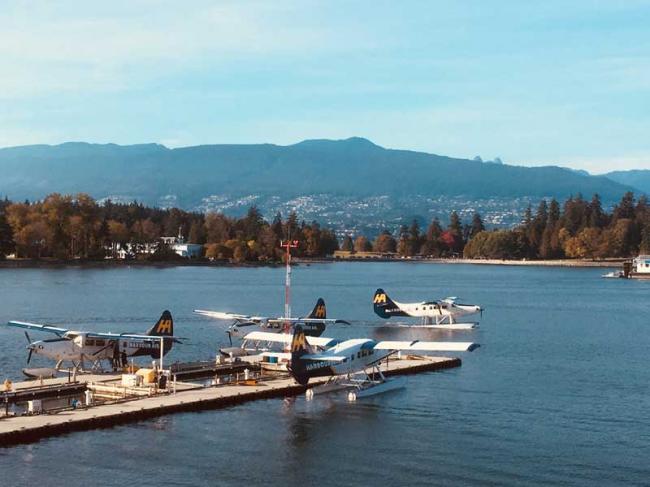 While any time of the day if you are checking out the rather touristy Vancouver Convention Centre watching the seaplanes taking off and landing against the backdrop of a beautiful mountain scape (at Coal Harbour) , you would see people merrily walking, jogging or cycling in this recreational spot in the city.

The one green initiative that strikes you once you are in this city is the dedicated cycling lane. Cycling is the fastest growing mode of transportation in Vancouver. From 2008 to 2011 alone, trips by bike increased by a full 40%,  according to official data.

The protected bike lanes to key city streets- painted in green- has increased both cycling and walking trips, it says. 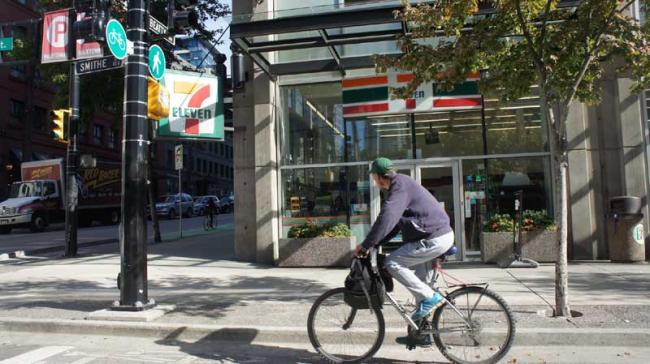 This separation increases feelings of safety and comfort, which makes cycling an attractive commuting option for those who are not used to riding their bikes regularly.

When people walking know that people won't be riding their bikes on the sidewalks, walking feels more comfortable, as well, the authorities say.

According the city's official website, Vancouver adopted its Renewable City Strategy in November 2015—the first jurisdiction in North America to create a comprehensive 100% renewable energy target. 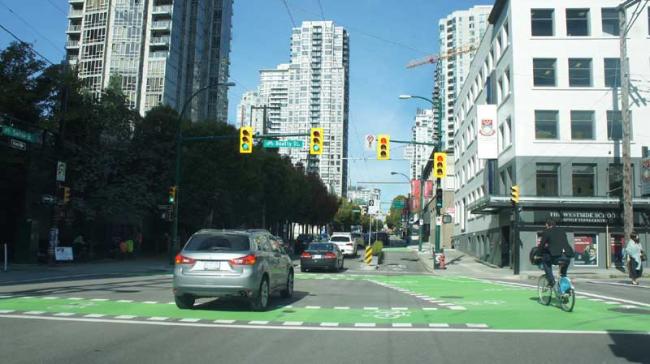 Its Greenest City Action Plan is aimed at urban sustainability.

"We are working with Council, residents, businesses, other organizations, and all levels of government to implement this plan," the officials say as they aim at a strong local economy, vibrant and inclusive neighbourhoods and international recognition, all for meeting the needs of generations to come 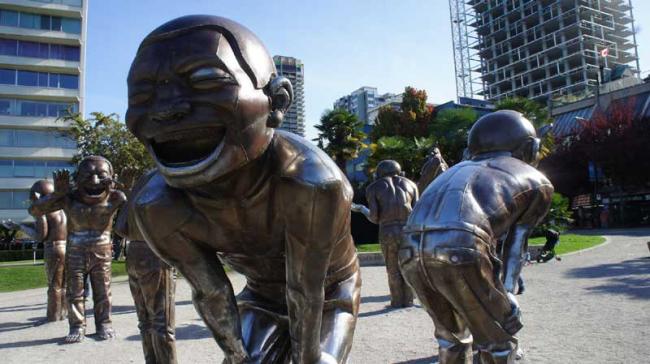 On a late September morning a visit to the Stanley Park revealed for the writer everything that Vancouver talks about.

The park is about 400-hectare natural West Coast rainforest with a delightful view of a canvas that includes water, mountains, sky, and the majestic trees along its famous Seawall.

Vancouver advertises it for tourists as "kilometres of trails, beautiful beaches, local wildlife, great eats, natural, cultural and historical landmarks, along with many other adventures." 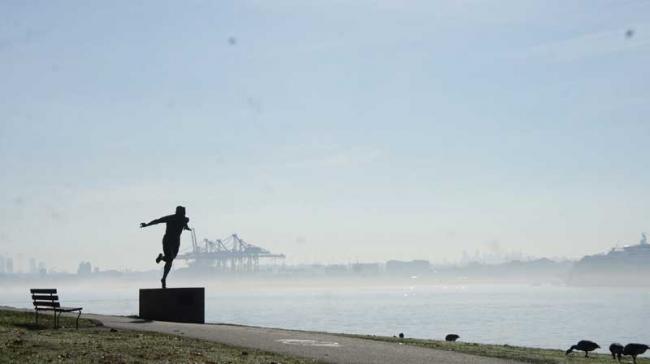 But for a visitor from a part of the world where cities are nothing less than noxious urban nightmares, it is also about serenity and inclusiveness in a public space in sync with nature and an urban skyline.

Of the 28 km uninterrupted Seaside Greenway in Vancouver the Stanley Park Seawall is the best stretch.

The Seawall is divided into two sections - one for walkers and joggers (closest to the water), and one for cyclists and inline skaters (inside path).

In Stanley Park,  beautifully carved, red cedar portals of aboriginal motifs welcome visitors to the Brockton Point Visitor Centre and to the traditional lands of the Coast Salish people. 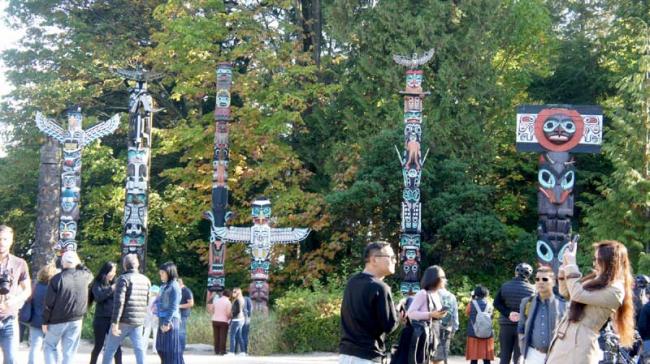 Marked by the traditional slant-roof style of Coast Salish architecture, they were constructed over three years and installed in 2008. The  gateways were created by Coast Salish artist Susan Point, in collaboration with Coast Salish Arts and other stakeholders.

Here you also spot nine beautiful totem poles that are carved in wood with secrets telling the stories of the land and its people.

Stanley Park is one place for walkers and cyclists as well as your brooding relaxation time. While you can sit back and enjoy the skyline and the waterfront, cyclists, joggers, runners pass by.

From mid-March to the end of October, you can also enjoy a  one-hour narrated horse-drawn carriage ride through the park's eastern side and its sites.

In the summer months, the Vancouver Trolley Company offers a daily 45-minute narrated hop-on, hop-off tour of Stanley Park. The old-fashioned San Francisco-style trolley stops at 15 of the park’s most popular spots.

And yes, wrap up the Stanley Park tour with the Prospect Point, which offers a panoramic view of  the Lions Gate Bridge, North Shore Mountains and Burrard Inlet. 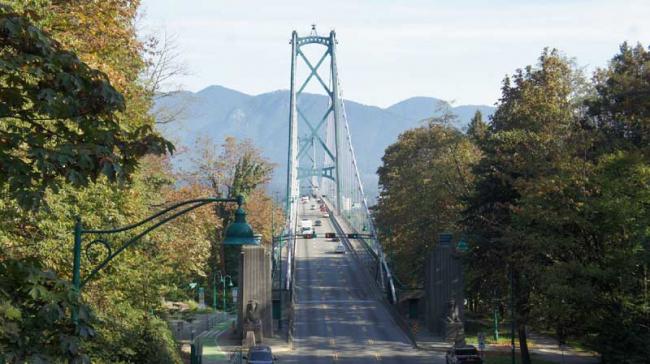 Stanley Park has also several forest trails to be explored by foot or bike.

If Vancouver has been ranked on top bracket as one of world's most liveable cities for years, then Granville Island and Public Market here is the biggest tourist magnet. And hold one, this is a tourist hotspot which is also a zero waste zone where plastic bags are now thing of the past. 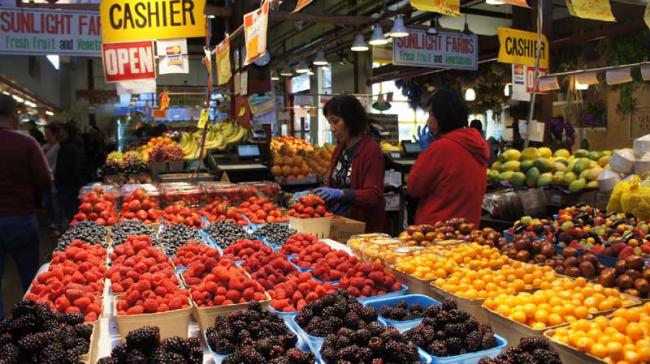 Sitting south of the downtown peninsula under the Granville Bridge, it is technically a sandpit and not an island. "By re-purposing established buildings Granville Island was transformed from a run-down industrial area into a vibrant cultural hub while preserving the neighborhood’s unique historical feel and becoming an internationally renowned example of urban renewal," says the Granville Island authorities. 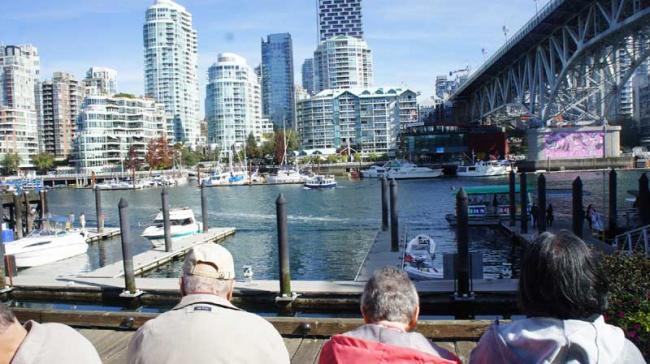 The authorities here replaced garbage cans with zero-waste stations that include separate receptacles for recycling and food scraps while reusable shopping bags were introduced to phase out single-use plastic shopping bags completely.

The Public Market attracts foodies with the shops and counters offering a lip-smacking range of food items- fresh from the ocean or oven. Stalls serve unique homemade products besides the baked delights, pizzas or the shimmering seafood.

But while you indulge in gastronomical delight in Granville Island, the authorities have  expanded food scraps collection to the Public Market, restaurants and other businesses and  eliminated Polystyrene foam packaging for quick-service food vendors. 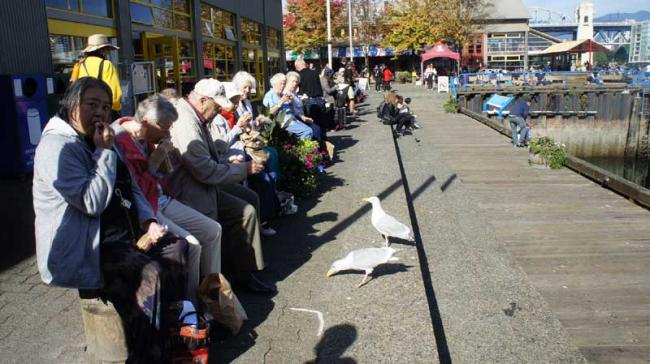 Outside of the market, catch a theatre show, browse an art gallery show, or choose a kayaking or paddleboarding tour.

And anytime, you are assured of some soulful music here by talented performers.. Granville Island rocks!!!

Gastown and Green Hotels Around

If you are in Vancouver and not been to Gastown, then you surely missed a vital part of the city. It is one of  Vancouver’s most vibrant and heritage-inspired zone with strong connection to history while catering to locals and tourists with its shopping and dining attractions. A tourist to Vancouver who wants to immerse in the cultural and heritage effervescence of Gastown and yet stay in a eco-friendly hotel, there are options galore around the place. 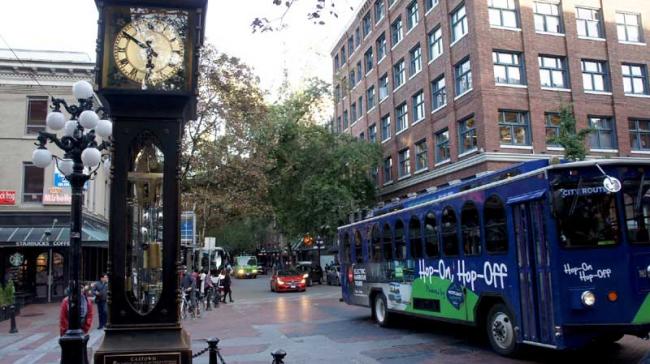 Even the Hyatt Regency Vancouver located close to Gastown prides itself for its green footprints. It is first downtown hotel to be awarded the highest rating of Five Keys by the HAC Green Key Program, since Vancouver Hyatt uses the services of Bullfrog Power (100% green electricity from wind power) for all its meeting rooms. 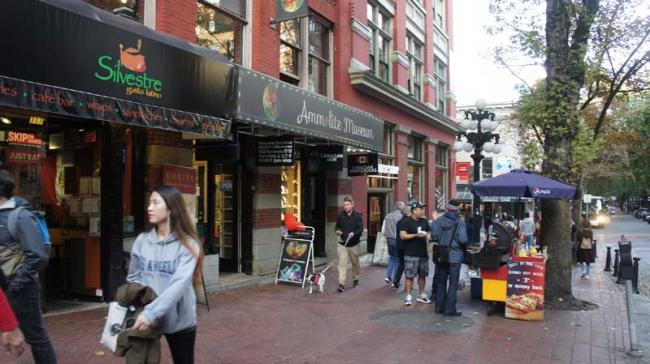 Vancouver beckons all those who want to go green in an urban centre this year!!!