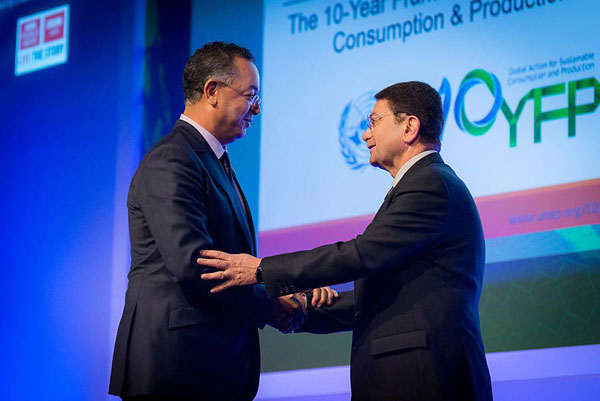 India Blooms News Service | | 07 Nov 2014, 03:09 pm
#global tourism initiative
New York, Nov 7 (IBNS) Tourism is one of the largest and fastest-growing economic sectors in the world contributing 9 per cent to global GDP, accounting for one in 11 jobs worldwide and for 6 per cent of global exports, the United Nations World Tourism Organization (UNWTO) reported on Thursday as it launched a programme aiming to catalyze a shift to more sustainable tourism.

The Sustainable Tourism Programme of the Ten-Year Framework of Programmes on Sustainable Consumption and Production Patterns (10YFP) introduced at the World Travel Market in London this week will be spearheaded by the UNWTO, the Governments of France, Morocco and the Republic of Korea, with the support of UN Environment Programme (UNEP).

"This important initiative is about steering the industry onto a truly sustainable path -- one that echoes to the challenge of our time: namely the fostering of a global Green Economy that thrives on the interest, rather than the capital," said UNEP Executive Director Achim Steiner in a statement .

It is estimated that by 2030, there will be 1.8 billion international tourism arrivals annually. If not sustainably managed, tourism can deplete natural resources leading to water shortages, loss of biodiversity, land degradation and contribute to climate change and pollution. Tourism’s contribution to global warming is estimated at 5 per cent of global CO2 emissions.

“As tourism continues to grow, so too will the pressures on the environment and wildlife. Without proper management and protection, as well as investments in greening the sector, ecosystems and thousands of magnificent species will suffer,”  Steiner said.

UNEP’s 2011 Green Economy Report revealed that under a “business-as-usual” scenario, projected tourism growth rates to 2050 will result in increases in energy consumption by 154 per cent, greenhouse gas emissions by 131 per cent, water consumption by 152 per cent, and solid waste disposal by 251 per cent.

Already, in the Galapagos Islands and Palau, visitors pay an entry tax to protected areas, which are sometimes referred to as ‘green fees.’ The revenues generated from these fees - which in Palau’s case is $1.3 million annually since 2009 – are used to support conservation and sustainable human development.

The 10YFP Sustainable Tourism Programme will aim to achieve major shifts in tourism policies and stimulate greater sustainability within the tourism supply chain. A collaborative initiative, the programme aims to improve resource efficiency, management effectiveness, and the use of new technologies to promote sustainable consumption and production patterns in this key sector.

Meanwhile, the three countries leading the initiative have already taken steps to promote sustainable tourism. As the most visited tourism destination in the world receiving 85 million tourists a year, France recognizes sustainable tourism as fundamental to preserving its heritage.

And Morocco is hoping to capitalize on its natural and cultural advantages in a way that will yield the most sustainable social and economic benefits to all Moroccans. The Government of the Republic of Korea has already integrated principles of sustainability into its tourism policies and is accelerating programme implementation nationally.

The 10YFP was established after Heads of State, meeting at the UN Conference on Sustainable Development (Rio+20) conference in 2012, agreed that sustainable consumption production was a cornerstone of development, and an important contributor to poverty alleviation and the transition to low-carbon green economies.