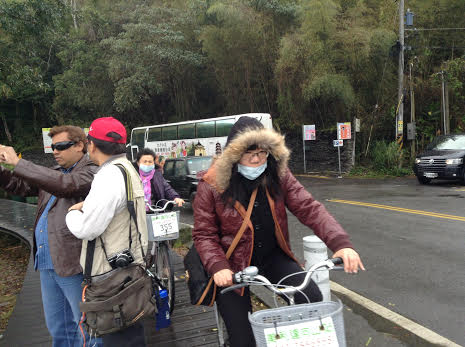 Taiwan is a very cycle friendly nation and a cycling track envelops the whole nation.

Doing a bicycle circuit around Taiwan has now become an item on many people’s ‘bucket list’! Since 2010, the Tourism Bureau has actively conducted a whole series of events related to the Taiwan Cycling Festival, enthusiastically inviting the Taiwan public to lay down their “tire” tracks and turn the results of innovation in transportation construction into a new resource for tourism, aiming to make Taiwan into an international-level paradise for leisure cycling.

Taiwan has an excellent highway system plus a superior topography so that when cycling, a rider can also appreciate magnificent scenery along the route! A series of activities during the “Taiwan Cycling Festival” focuses on bicycle touring and ties together the tourist and transportation resources of the various county seats to present the specifics of a diverse and local touring culture. Against the backdrop of beautiful mountains and water scenery, bicycle enthusiasts from around the world can come on a rich recreational cycling experience!

The Taroko Gorge Marathon takes place annually at the Taroko National Park. Known for its magnificent view of the gorge, features the Central Cross-Island Highway, entering the archway of the Highway from Sioulin Township of Hualien, passing through the Taroko National Park Administration, Changchun Temple, Tunnel of Nine Turns, and Tiansiang, and connecting to Dayuling, turning to the branches of the Western or the Central Cross-Island Highway to end in Yilan, with beautiful scenery along the way, which are deep valleys resulting from cutting actions of the changes in the crust and rivers together, that displays the amazing forces of nature.

Liwu River’s gurgling flow rushes under your foot, and the air is fresh! Taroko National Park is really a rare gem in the world.

Each year, the events in the Marathon always create new tournament records, regardless of the number of participants, the nationalities of the players, and the race results. The Taroko Gorge Marathon is now an international tournament, attracting participants from around the world and people who love jogging, walking or running to enjoy the beauty of the national park. The activities of Taroko Gorge Marathon are divided into the groups of full marathon and half marathon to cater to different levels of fitness.