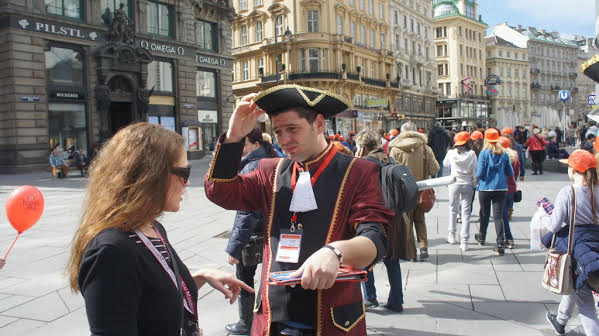 The overnight stays, defined as the number of nights spent, recorded an impressive 12.7 per cent growth to over 61,000 overnight stays in the 12 months ending August 2014. On an average, a tourist from India spent over 2.5 nights in Vienna during this period.

“This winter, Vienna looks forward to showing off its famed Christmas markets that take over the city from mid-November until Christmas,” says Ms Isabella Rauter, Vienna Tourist Board Manager responsible for Indian market.

Some of the well-known Christmas Markets include the ones in Rathausplatz set against the imposing backdrop of City Hall, the Old Viennese Christmas Market in Freyung. The markets at Schönbrunn Palace and the Belvedere have a distinctly imperial feel, as does the Christmas Village on Maria-Theresien-Platz, located between the Natural History Museum and the Kunsthistorisches Museum.

Vienna’s Christmas markets are a must-visit place. One can indulge in Christmas shopping while enjoying a mug of punch. Vienna’s Advent markets have plenty of mouth-watering specialties including spiced teas, drinking chocolate and mulled wine.

This Christmas drama unfolds against a glittering backdrop.

Beginning end November, 2.5 million bulbs lit with environment-friendly LED and energy-saving lamps flash along 20 kilometers of streets to create an unforgettable Yuletide ambience. The dazzling evening lights, giant chandeliers on Graben and huge red globes on Rotenturmstrasse, along with the spirit of the Advent markets provide an unforgettable photo opportunity.

Vienna is equally popular with diverse groups of Indian travellers--families with children, grandparents, honeymooners and conference attendees--who soak in everything that the historic city has to offer, including waltz, operas and delectable Viennese cuisine, the only one in the world to be named after a city.

Vienna is a voyage of discovery and a delightful location and that’s something everyone knows. No surprise that Mumbaikar Rajeev who will tie the knot in winter has his eyes fixed on Vienna. “We have chosen Vienna as one of our destinations for our forthcoming honeymoon. Rave reviews by a colleague who visited Vienna for honeymoon last X-Mas helped us make this decision,” he says.

The sentiment is echoed by his fiancé Susan. “We look forward to great sightseeing, music and shopping at the Christmas markets and a session in Waltz, which is perfect for ringing in the New Year,” adds Susan.

“Indian tourists love Vienna as it provides a charming mixture of old and new, which creates a particular uniqueness compared to other European cities along with a wide range of attractions for the younger generation,” sums up Ilse Heigerth, a soft spoken English speaking travel guide.

150 years of the Ringstrasse

Ringstrasseis a treasure trove of public buildings and late 19th century private mansions, which are among the city’s most important sights and the “grandest public space in Europe”.

The Ring’s monumental buildings include the Vienna State Opera, Burgtheater, City Hall, Parliament, Kunsthistorisches Museum and Natural History Museum. The Ringstrasse provides the backdrop for large-scale events throughout the year that play out in the buildings lining the boulevard and its squares and parks. Cultural highlights include the world-famous New Year’s Concert by the Vienna Philharmonic Orchestra at the Musikverein, the official opening of the Vienna Festival in spring on the square in front of the City Hall.

The square also sets the stage for Vienna Ice World from January to March when it is transformed into an ice skater’s paradise. The Ringstrasse is the place to find the biggest and most traditional coffee houses in Vienna.

The Vienna Ring Tram offers a multilingual audio sightseeing tour. Of course, one can also experience Ringstrassein one’s own vehicle or cycle along the path.

How to Get There