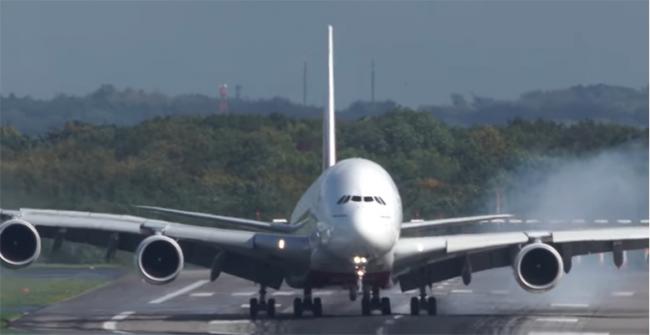 The video of the flight making the hard landing amid heavy winds has gone viral on the internet.

It has already been watched  over nine million times and  Cargospotter captioned the video as: "I have filmed a few thousand crosswind landings at several airports in Europe within the past years, but this Airbus A380 crosswind landing was extremly hard and extraordinary. At first it looked like a pretty normal crosswind approach but after touchdown the pilots tried to align with the runway which looked pretty incredible. I have never seen such a tremendous reaction of an airplane after a touchdown. You can see that the pilots tried to align with the runway by using the tail rudder and luckily it worked out. "

"This video shows the incredible skills of the pilots. Even after an unexpected wind gust after touchdown they managed to re-align with the runway. Incredible job by the pilots !!Watching an Airbus 380 is always interesting and a pleasure to watch. I would realy like to know what the passengars thought during the Arrival today at Düsseldorf," the caption further said.

The video also showcased the skills and efficiency of the pilots as they made a safe landing of the flight at the end.

"Emirates flight EK 55 on October 5, 2017 landed safely in Dusseldorf under strong crosswind conditions. At no point was the safety of the passengers and crew onboard compromised," an Emirates spokesperson told Khaleej Times.