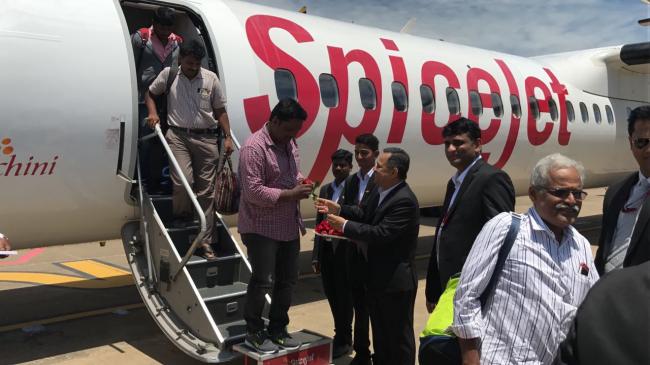 The Hyderabad-Puducherry flight becomes the third daily flight to be launched by SpiceJet under the UDAN (Ude Desh ka Aam Naagrik) scheme. The traditional flag-off and lamp-lighting ceremonies were held at the Puducherry Airport.

Puducherry is one of the four un-served markets the airline will be operating to under the UDAN scheme.

With this new flight, Puducherry will be connected with Delhi, Mumbai, Bengaluru, Chennai, Tirupati, Ahmedabad, Jaipur, Chandigarh, Vijaywada and Varanasi with convenient onward connections on the SpiceJet network.

Flight SG 1005 was given a ceremonial flag off at 11:40 am which departed from Puducherry on its maiden flight to the Rajiv Gandhi International Airport, Hyderabad.

The first few passengers were welcomed and mementoes were gifted to them. In line with the aviation tradition to mark key milestones, the flight was greeted with a grand water cannon salute upon its arrival at the Puducherry Airport.

On the occasion of the flagging off ceremony, Shilpa Bhatia, Senior VP, Commercial SpiceJet said, “SpiceJet is proud to induct Puducherry on to its network. Seen as an education, healthcare and tourism hotspot of the country, Puducherry is also home to several big IT software and hardware giants and has seen remarkable growth in recent years. SpiceJet is excited to contribute to this growth story and our flights will help bring in more leisure and business traffic to the UT.”