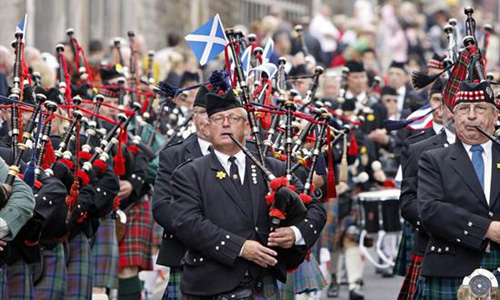 India Blooms News Service | | 28 Jun 2014, 04:47 pm
#Pipefest kicks
Stirling, June 27 (Not in Town/IBNS) The kilts are packed, the pipes tuned and the Highland dancers are limbering up Pipefest gets underway in Scotland's Stirling on Friday.

The spectacular event  celebrates the Year of Homecoming and mark the 700th anniversary of the Battle of Bannockburn.

Over 1,650 participants from across the world including pipe bands, Highland dancers and clan members are travelling from as far afield as Australia, Belgium, Canada, England, France, Germany, Italy, Norway, New Zealand, Sweden, Switzerland and the USA.

The parade which kick-starts Stirling’s Big Weekend featuring Bannockburn Live (Saturday and Sunday), Armed Forces Day National Event (Saturday) and Stirling's Big Night Out (Saturday) will start from the gates of Stirling Castle and proceed through the ancient City of Stirling.  Tens of thousands of visitors are expected to descend on the city during the weekend.

Visiting Scotland from the USA for the first time will be the popular Columbus Police and Fire Pipes and Drums, which is made up entirely of active, full-time Columbus police officers and firefighters.  The Greater Victoria Police Pipe Band from Canada will also have over fifty players take part on Friday evening.

The largest group travelling to take park is Dunedin High School Scottish Highlanders from Florida with over 125 participants.

Over twenty five Scottish Clans have registered to take part in the parade including the Clan Currie Society from the USA, Clan MacNicol and Clan McMillan from Australia and the Clan Henderson Society from the USA.  Clan Moffat, Clan Arthur, Clan Urquhurt, Clan Bell, Clan Oliphant will also be taking part on Friday as well as local dancers from the Julie Young School of Dancing in Perth and the Theresa Kelly School of Highland Dance.

Pipefest is supported by Homecoming Scotland, The Famous Grouse Experience and Stirling Council.

Tourism Minister Fergus Ewing said: “Pipefest Scotland is an exciting addition to the packed programme of events taking place during our second Year of Homecoming, with participants and visitors from around the globe taking part in the parade on the eve of the Bannockburn Live event.

“Alongside a stunning re-enactment of the battle itself, Bannockburn Live – a key fixture in the Homecoming Scotland 2014 calendar commemorating the 700th anniversary of the Battle of Bannockburn – will feature a programme packed with Scottish music, food and drink, crafts, literature and outdoor activities for people of all ages.

“Scotland is welcoming the world in 2014. Homecoming Scotland 2014 now includes over 880 events, happening the length and breadth of the country, extending the benefits of the Ryder Cup and the Commonwealth Games and positioning Scotland on the international stage as a dynamic and creative country with a rich history and culture.”

Stirling’s Provost Mike Robbins said: “We are delighted that Stirling is playing host to this international event and we look forward to welcoming visitors from home and afar to what promises to be a lively, musical and multicultural day.  The sight of thousands of pipers and other musicians marching through the city will be an amazing sight and a perfect way to mark the 700th anniversary of the Battle of Bannockburn and to launch Stirling’s Big Weekend.”

The Famous Grouse Experience, General Manager, Stuart Cassells said: “In my new role as General Manager at The Famous Grouse Experience at Scotland’s oldest distillery, I am involved in many heritage and tourist events across Scotland. As a fellow piper and founder of The Red Hot Chilli Pipers, I am especially privileged to be a part of Pipefest 2014, marking the 700th anniversary of the Battle of Bannockburn. I was also a previous Pipe Major of the local pipe band The Royal Burgh of Stirling, so being a part of this great event really does feel like a homecoming.”

Following the finale at the King’s Knot, there will be a ceilidh at Stirling Albert Hall featuring top Scottish band, Whisky Kiss.