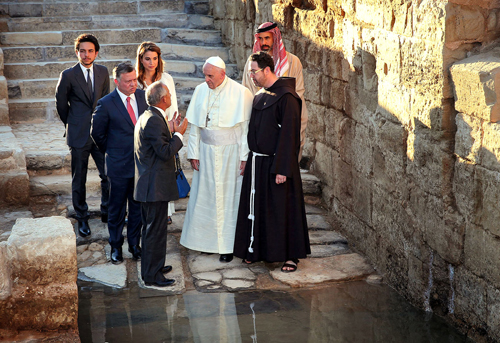 India Blooms News Service | | 16 Jun 2014, 05:13 pm
# Jordan
Amman, June 16 (Not in Town/IBNS) Pope Francis in his recently concluded visit to Jordan touched many hearts and souls. From the moment his plane touched down at Amman's Queen Alia International Airport, where an honor guard and Catholic leaders met him on arrival; to his meeting with King Abdullah II and Queen Rania at the royal palace and the Mass he led at Amman's International Stadium; it was obvious he is truly a down to earth people's Pope.

During his visit, he also met refugees and disabled children at a church in Bethany beyond the Jordan, which is the traditional site of Jesus’ baptism.

The Pope lauded Jordan for the “climate of serene coexistence” enjoyed by Christians and Muslims in the desert kingdom. He called for greater protections for minority Christians across the region in a speech to King Abdullah II and Jordanian political and religious leaders.

The city of Amman was in a festive and celebratory mood during the Pope’s visit as groups of people waving Jordanian and Vatican flags cheered the Pope’s convoy as he passed.

Descendents of ancient Arab tribes, Jordanian Christians are one of the original Christian communities in the world . Today, Christians in Jordan prosper, as they have for the past 2000 years, in harmonious relations with their fellow Muslim citizens. All Christians are free to worship and practice their traditions according to their beliefs.

The most important Biblical site in Jordan is the Baptism Site of Jesus Christ. Overwhelming Biblical, archaeological and historical evidence has led religious leaders throughout the world to recognize this place as the authentic site of Jesus’ baptism. Every year, hundreds and thousands of visitors from all different faiths and countries take a pilgrimage to Bethany beyond the Jordan.

Jordan is replete with stories of leading Biblical figures, whose teachings and deeds have affected and influenced the lives of millions of people around the world. Jordan is also home to Petra, one of the new Seven Wonders of the world, the Dead Sea, Jerash, Wadi Rum and many other spectacular historic and natural treasures, making the country and ideal destination for religious, wellness, adventure and eco-friendly tourism.