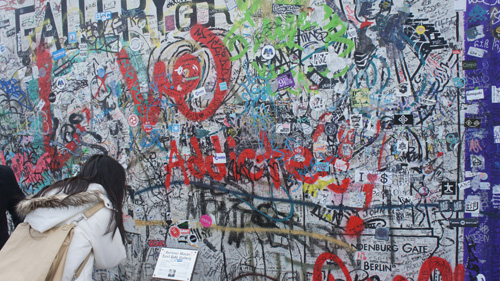 Trans World Features | | 11 Jun 2014, 01:15 pm
#Wall of memories
This year commemorates the 25th anniversary of the fall of the Berlin Wall. Visiting the site one can gain insight into the history of Berlin as a divided city and the wallâ€™s significance to the city's residents. Susanta Paral was there recently

Bricks are made of mud and sand, and of fly- ash too, but this wall was built with bricks of pain and heartlessness. This is the famous, or infamous rather, the Berlin Wall. Though it was brought down in 1989, its remains is a grim reminder of an era when a nation was divided on the basis of ideologies which themselves are in the wane now.

Brandenburg Gate is the most prominent of the eight crossings between erstwhile East and West Germany. Originally conceived as a ‘peace gate’ while constructed in the 18th century, between 1961 - 1989 it was behind the wall in  no man’s land when East Germany and West Germany were different entities. Today besides being a tourist attraction, it is also a popular place for protesting against human rights abuse and other issues.

Getting up- close  to the defunct wall at is like witnessing history at the barrier at Bernauer Strasse,  a street between the  Gesundbrunnen and Mitte. The Berlin Wall Memorial and Documentation Center at this spot was closed for renovation in preparation for the celebration of 25th anniversary of the fall of the Berlin Wall. Many special events and exhibitions to commemorate this historic event are being planned across the city. However, the Observation Tower was open. From here you can see the skeleton of the wall, the once ‘no man’s land’ behind, and a watch tower and crematorium which once belonged to erstwhile East Germany.  Some portion of wall has been demolished to connect roadways but different designs have been concocted on the road to recall the existence of a wall once dividing the German people.

In some portion iron rod structures of the wall are ideal representation of history. Actually too many bullets sprayed from watchtowers at people trying to cross the wall had left only its bone structure (iron rods).  There is a permanent open air exhibition on display with audio visual shows and photos which often leave visitors in tears.

But the most exciting segment of Berlin Wall is surely the East Side Gallery where the graffiti painted on the Wall by artists across the world along river Spree in Kreuzberg area is a creative protest against fascism and dictatorship.

The East Side Gallery, which is a 1.3 km long remnant of the Wall, is now an international memorial for freedom and contains about 105 works painted on 1990.  One of the famous graffiti depicts ‘Fraternal Kiss/ Kiss of death’ by Dmitri Vrubel with the words “My God, Help Me to Survive This Deadly Love” recreated from an iconic photograph capturing the famed embrace snapped by Regis Bossu in East Berlin on October 7, 1979. It shows Russian premier Leonid Brezhnev and East Germany’s head Erich Honecker kissing to celebrate the anniversary of its founding as a Communist nation .

Some of the writings on the wall are food for thought, indeed. If one says “Love Stories Suck”, another says “One Day We Will Be in Charge.”

Indian painter Narendra Kumar Jain’s  The Seven Stages of Enlightenment features in the gallery too showing off an essential quintessence for colourful depiction in India.

Now, in the run up to the anniversary events, during a walk along the wall one can see parts of it being restored and repainted.
Germany, unified now, is the strongest economy in EU today. In the changed reality a modern sky-scrapper can be seen rising up right in the middle of the “East Side Gallery’. According to a petition in change.org, what remains of this important historical and cultural landmark is now under threat. Berlin construction investor "Living Bauhaus" owned by Uwe Hinkel started to take down part of the so called "East Side Gallery" in order to build high-end apartments on what was once called the "death strip." Huge protests took off online and through the streets of Berlin in order to protect the Berlin Wall Monument.

‘Checkpoint Charlie’ is another  famous crossing where Soviet and American tanks had briefly faced each other during the Berlin Crisis of 1961. The stroke of a signature on 12 August, 1961, had divided a people which lasted till the fateful day when the Berlin Wall came down in 1989.

The Checkpoint Charlie Museum has been created to document the so-called "best border security system in the world.” The guard house is viewed from what was once the American sector. Beyond it is a mast with an image of a Soviet soldier. Dressed in Soviet soldier uniform men enact the history of the event.

On display are the photos and related documents of successful escape attempts by people from East Germany, together with the escape apparatus: hot-air balloons, getaway cars, chairlifts, and even a mini-U-Boat.

The 25th anniversary of the fall of the Berlin Wall will come exactly on Nov 9, 2014. Many special events and exhibitions to commemorate the anniversary of this historic event are planned across the city. Themes include the division of the city, the Cold War and the events leading up to peaceful reunification in 1989-1990. Berlin visitors will also have the chance to gain some insight into the history of Berlin as a divided city and the significance of the Wall for the city's residents. Events will include guided cycling tours along the Wall Trail, visits to the former watchtowers, the East Side Gallery and a tour of former East Berlin in a real East German Trabant car.

The high point will be in the autumn during the weekend of  Nov 9. A special light installation will be set up along the former course of the Wall as a "symbol of hope for a world without walls". Made of thousands illuminated, helium-filled balloons, a border made of light will run for twelve kilometres across the city centre for the entire weekend: from the former border crossing at Bornholmer Straße through the Mauerpark (Berlin Wall Park), along Bernauer Straße, past the Berlin Wall Memorial, then to the river Spree near the Reichstag , the Brandenburg Gate and Potsdamer Platz, Checkpoint Charlie and finally to Kreuzberg and along the Spree to the Oberbaumbrücke.

Berliners and visitors will be invited to stroll along the course of the Wall to remember and visualise the extent of the former division. At five spots, the white balloons will be released into the air as a commemoration of the opening of the Berlin Wall 25 years ago and to reclaim the symbol of the peaceful revolution of 1989.

A show titled “Architecture in the Sixties - Urban planning and construction in divided Berlin” will be held at   Berlinische Galerie from Nov 21, 2014 to March 2015 about architecture and urban design in East and West Berlin.