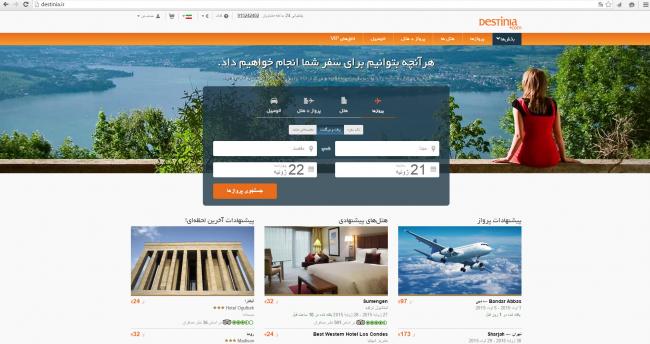 India Blooms News Service | | 24 Jul 2015, 06:55 pm
#Travel agency Destinia, # Iran, # Onlinetravel, # Madrid, # Cairo, # Dubai, # Teheran
Tehran , July 24 (IBNS): Destinia.com, the international online travel agency with offices in Madrid, Cairo and Dubai, has expanded its presence in the Middle East with its entrance in the market of Iran.
“For Destinia, this is a natural step within our expansion strategy in the region. We are talking about a large market in terms of population, with a growing middle class and an unspoilt country in terms of business: no other online agency currently operates in Iran," affirmed Amuda Goueli, CEO of Destinia.
The Iranian economy is the second largest in the Middle East, following Saudi Arabia, and with a population of 80 million inhabitants. It is the most populated country in the region and the second largest in the MENA region, following Egypt.
“In addition, it is a very young population, as well as internet savvy.  It is estimated that more than 60% of the population is less than 30 years old and that roughly 50% of the population has access to internet, even though limitations do exist. The recent nuclear agreement, coupled with the resulting improvement in commercial relations, will positively impact the takeoff of the economy. Tourism should play an important role in this new scenario," said Goueli.
According to World Travel & Tourism Council (WTTC), spending on domestic travel will increase by 6.8% this year and is set to double by 2025.
The first step taken by the agency was to offer, as of last year, the website in Persian: Destinia.ir. The second step was to develop and implement a local payment system: Shaparak, a payment channel using local banks’ own credit cards to pay in rials.
“The payment method was, without a doubt, the most complex part. Keep in mind that in Iran, citizens do not have conventional credit cards in Western markets, such as VISA or MasterCard. In addition, local banks work with the Islamic calendar, which is another complication for our systems," explained Goueli.
The landing process in the country has been slow and involves the fulfilment of an endless number of legal restrictions.
“We are just in the initial phase. We still have several obstacles to overcome before offering a product that will meet the expectations of the Iranian tourist, however I am confident we will develop a fruitful relationship," assured Goueli.
The entrance into the Iranian market is part of a larger strategic expansion by the agency in the MENA region.
Just a year and a half ago, Destinia opened its doors in Dubai, adding to its offices in Cairo.
The objective is to be one of the top three Arabic OTAs in the region by 2017. Last year, Saudi Arabia entered the top ten most important international markets for the agency and sales from the MENA region grew by 140%.
The most demanded destinations by Iranian tourists are Thailand, Turkey, UAE, Armenia, China, Russia and South Korea.  In the case of the first three countries, the demand is greater given a visa is not needed o can be easily obtained.
Local authorities have announced new measures to be implemented in order to facilitate the entrance of foreign tourists to the country, reducing or even eliminating the visa requirement for some nationalities.
Destinia will also operate in the country via its generic platform, Onlinetravel, to provide technological services to traditional travel agencies.
“About thirty agencies have already put their trust in us to take the leap to online sales," said Goueli.
Last January, Destinia delivered a presentation about its product in Teheran to various tourism authorities of the country, in addition to roughly a hundred local travel agencies.
Related Images