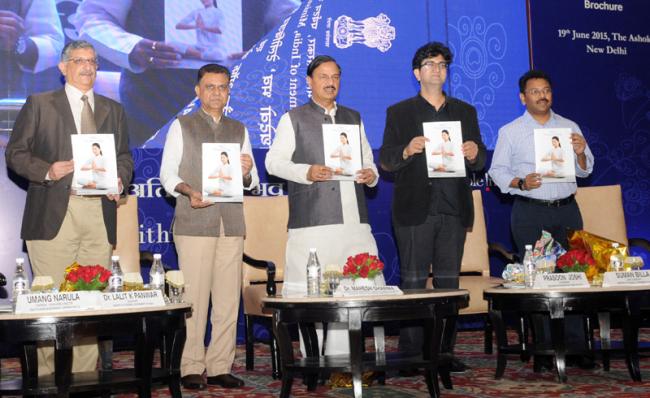 India Blooms News Service | | 19 Jun 2015, 09:20 pm
#Mahesh Sharma, # atithi Devo Bhava, # TV commercial, # Prasoon Joshi, # Aamir Khan
New Delhi, June 19 (IBNS): Minister of State for Tourism (Independent Charge), Culture (Independent Charge) and Civil Aviation, Mahesh Sharma launched the new edition of 'Atithi Devo Bhava' television commercials and a brochure titled 'India-The Land of Yoga' at a function organized in New Delhi on Friday.
The four films, made on the theme of “Atithi Devo Bhava” spread awareness about ways to extend hospitality to tourists visiting India by adopting an honest and helpful attitude, as well as maintaining cleanliness and hygiene.
Veteran actor Aamir Khan is the brand ambassador for these impressive films and they have been directed by the eminent ad maker Prasoon Joshi.
While launching the brochure “India- The Land of Yoga” on the occasion of the ‘International Day of Yoga’ being celebrated across the world on 21st June, Sharma said that the celebration of International Yoga Day is a matter of pride for India and many countries of the world are supporting us in this endeavour. The brochure on Yoga includes details of Yoga destinations which will help to promote Yoga as a tourism product.
Speaking on the occasion, Lalit Panwar, Secretary, Ministry of Tourism said that Yoga Day is our unique gift to the world and it will help in promotion of Global Tourism in India.
Sharma thanked the Brand Ambassador Aamir Khan and Director Prasoon Joshi for making these films and helping in boosting the image of tourism in India. He said that security, hospitality and cleanliness are the main strengths of tourism in India and the Ministry of Tourism is working on a mission mode to achieve these objectives.
The Minister said that the Indian Government has launched a Helpline 1363 or 1800-111-363 to help the foreign tourists and guide them on their arrival in India. The helpline will be available in twelve foreign languages within a month to facilitate the foreign tourists. Currently, the Helpline is available in Hindi and English.
The Minister also announced the setting up of s National Medical and Wellness Tourism Board to boost medical tourism in India. The Board will help to bring together and showcase on an international platform the various streams of medicine available in India including Ayurveda, Yoga, naturopathy, Unani and low cost allopathic treatments ,Sharma added. He said that this will give an organized structure to medical tourism in India with participation of various stakeholders including the private ones.
In another important step to promote tourism, Dr Mahesh Sharma announced four new theme based circuits under the Swadesh Darshan scheme that will be developed in the next year. These four circuits are Wildlife Circuit, Spiritual Circuit, Desert Circuit and Ramayana Circuit. These four circuits will be in addition to the five circuits already being developed by the Ministry of Tourism.
Explaining the significance of Tourism, the Minister said that it helps generate employment in addition to earning foreign exchange

. It is for this reason, it is important to move beyond the concept of ‘tourist season’ and promote India as a 365 days tourist destination, he explained. Dr Sharma further said that this can be done by developing various streams of tourism like medical tourism, MICE, spiritual tourism, Yoga etc.
Lyricist and poet Prasoon Joshi said that ‘Atithi Devo Bhava’ is the core of our culture and we must promote is as our USP for the purpose of tourism, the Minister said.
The four films launched on Friday would be telecast on various television channels to spread the message of ‘Atithi Devo Bhava’ across the country. The films would go a long way in educating people about the importance of tourism and touristic values. This is a further step in augmenting the efforts made by the Ministry of Tourism for promotion of tourism.
Senior officials of the Ministry of Tourism were also present on the occasion.
Related Images