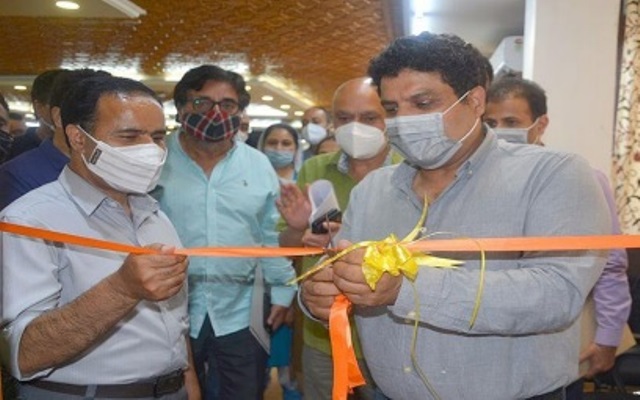 Srinagar/IBNS: Secretary Tourism and Culture, Sarmad Hafeez Tuesday inaugurated a video conferencing facility at the Directorate of Tourism, Kashmir to facilitate the online meetings and webinars of the department, including the tour operators of the Kashmir division.

An official spokesman in a statement issued here said that during the inauguration, the Secretary spoke about the merits of the facility and said that it will help to facilitate online departmental meetings and would also facilitate webinars of tour operators.

Earlier, the Secretary also chaired a meeting of officers with Chief Executive Officers of all Development  Authorities, officers of tourist destinations, resort officers, tourism officers and other concerned.

Speaking on the occasion, Sarmad Hafeez exhorted upon all the heads of tourist destinations to have better upkeep of all tourist resorts and destinations while stressing for the identification of new trekking routes in the vicinity of these tourist destinations so that more tourists could be attracted to adventure tourism besides sightseeing.

He also stressed upon officers concern for the sanitisation of tourist places to make the areas garbage free by carrying out routine cleanliness drives in their respective tourist destinations.


Besides, he also impressed upon the concern for new and innovative ideas to promote tourist destinations like signages and hoardings etc so that visitors could be facilitated at the maximum in the best possible way.

He also called upon the officers to sensitise service providers like ponnywalas, taxi drivers, tourist guides among others so that a good reputation can be kept with the visiting tourists about the particular place of their visit.

Later, the Tourism Secretary had an interactive meeting with groups of travel trade fraternity who brought several of their issues to his notice and sought their redressal.