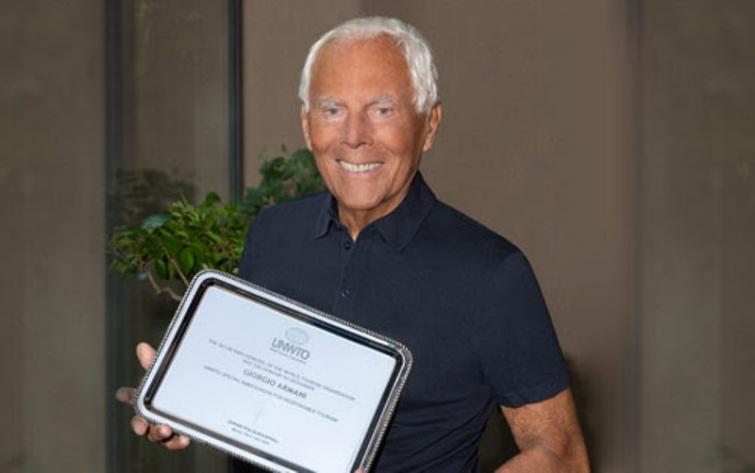 The announcement was part of the event marking the visit of the UNWTO Secretary-General to Italy, the first official delegation to travel since the closure of borders in response to COVID-19.

In their new roles, both Special Ambassadors will draw on their status and influence and promote the work of the United Nations specialized agency for responsible and sustainable tourism, the global body said in a release.

As leaders in gastronomy and fashion, the Special Ambassadors represent two of Italy’s biggest economic sectors and two of the industries that contribute to making the country a global tourism leader.

Since launching his own company in 1975, Giorgio Armani has become synonymous with Italian style.

As a chef, Gino Sorbillo celebrates traditional Nepalese pizza and has opened award-winning restaurants around the world.

UNWTO Secretary-General Zurab Pololikashvili said, “Italy is one of the world’s most famous tourist destinations. Each year, millions of people visit to enjoy its culture, its fashion and its gastronomy. In return, tourism supports livelihoods and local and regional economies and helps preserve this Italian culture."

According to the Secretary general, as UNWTO Special Ambassador for Tourism, Giorgio Armani can help amplify UNWTO’s key messages of the power of tourism to create opportunities and drive growth while Gino Sorbillo will showcase the unique ability of gastronomy to preserve and promote heritage and give tourists a unique taste of the destinations they visit.

Upon receiving the plaque, Armani said, ‘I am genuinely pleased to have been honoured in this way by an organisation that believes that people should be encouraged to see the beauty of the globe in a respectful and responsible manner. It has been a sense of responsibility for our community that has helped my country through this terrible pandemic, and this too is what has driven me to play my small part in helping those engaged in the fight against the virus, and the fight against the economic challenges it has posed. A belief in community – the global community – and an appreciation of the humanity we all share are what will help us build a better future for ourselves and the generations to come, through being mindful of the important things in life, like the preciousness of the environment and our duty to protect it. It is therefore an honour to take up the role of Special Ambassador for Tourism."

According to the release, the appointments also strengthen UNWTO’s strong relationship with Italy, the first Member State to receive a visit from the organization’s leadership since destinations around the world introduced restrictions on travel in response to the pandemic.

The UNWTO delegation led by the Secretary-General is on an official visit to Rome, Italy, Milan and Venice to work with both the national and city authorities to support tourism’s restart and ensure this goes hand-in-hand with wider economic and social recovery.