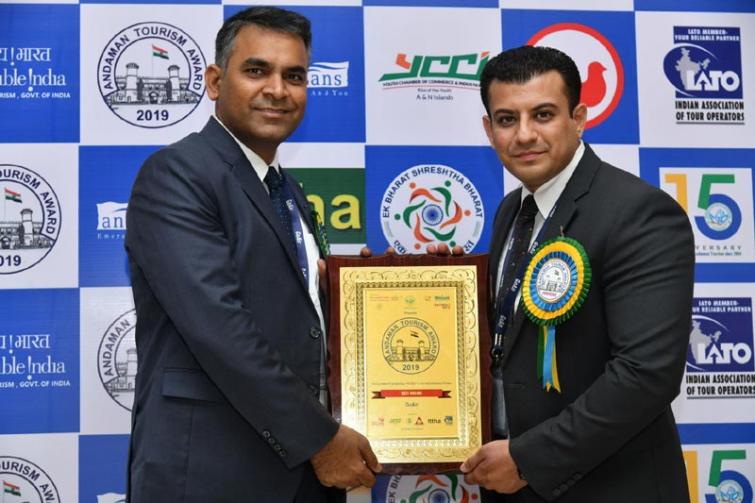 New Delhi: Airline major Go Air has been honored with the ‘Best Airline’ award by Andaman Tourism Award - 2019, in its first edition.

At a grand ceremony held in picturesque Port Blair, GoAir was awarded for its exceptional leadership in attaining on-time performance for 12 consecutive months.

Andaman Tourism Award was organised in association with the Ministry of Tourism, India and Andaman Association of Tour Operators. Along with prominent hotel chains, tour operators and restaurants GoAir was felicitated for playing a prominent role in boosting tourism in Andaman & Nicobar islands.

The award was presented by M Vinod, President, Andaman Association of Tour Operators and R Sarath Kumar, Indian Film Actor and it was received by Sarvesh Tiwari, General Manager - Airports and AmanKohli, Airport Manager, Port Blair on behalf of GoAir.

Commenting on the latest achievement, JehWadia, Managing Director, GoAir, said: “It’s been 8 years since GoAir commenced flights to Port Blair as our 19th destination. Since then, innumerable sleepless nights have been spent by the GoAir family who have helped Port Blair grow from strength to strength. I’ve been told that according to various government figures, during 2011-18 there was an incredible increase of 150% in domestic tourist arrivals from 2.02 lakh to 5.13 lakh and the hotel accommodation has doubled along with phenomenal rise in the number of tourist cabs. I strongly believe that GoAir is an integral part of this growth story and the award is dedicated to the joint success of all the players in the ecosystem.”

According to the data released by the Directorate General of Civil Aviation (DGCA) GoAir – India’s fastest growing airline – has emerged as the most punctual airline in August 2019, thereby creating history in the Indian aviation sector.

This is the 12th month in a row that GoAir has achieved the distinction of being on top of on-time-performance (OTP) charts. As per the data, GoAir registered 85.1% OTP, the highest among scheduled domestic airlines in August 2019.