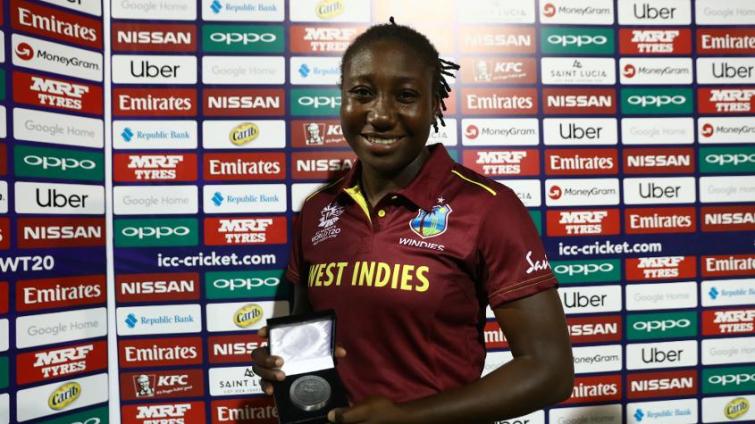 Dubai, Feb 19 (IBNS): Windies captain Stafanie Taylor has advanced two places and grabbed eighth position among batters even as a number of players from Pakistan and South Africa have also moved up in the MRF Tyres ICC Women’s ODI Player Rankings after winning their respective ICC Women’s Championship series.

Taylor led the list of run-getters with an aggregate of 158, including two fifties, in a 2-1 loss in Dubai that enabled Pakistan to overtake the Windies in the points table of the eight-team championship that provides direct qualification berths to hosts New Zealand and four other top teams in the ICC Women’s Cricket World Cup 2021.

South Africa have kept in contention for a direct berth in the pinnacle event by completing a 3-0 triumph at home over Sri Lanka, a verdict that has helped them to catch up with fifth-placed Windies on 11 points, even though they remain behind on net run rate. Pakistan’s victory over the Windies has lifted them to 12 points and they are now in the fourth position, just behind India on the net run rate in the list led by Australia with 16 points from only nine matches and New Zealand second at 14 points from 12.

For Pakistan, Sidra Ameen’s 148 runs in their series have helped her gain a whopping 36 places to reach 57th position, while Windies all-rounder Deandra Dottin (up one place to 20th) and Nida Dar (up 13 places to 55th) have also gained among batters in Monday’s update after also scoring in excess of 100 runs in the series.

South Africa’s Mignon Du Preez has gained one place to reach 22nd position among batters, while her compatriot Sune Luus (up three places to 35th) and former Sri Lanka captain Inoka Ranaweera (up eight places to 26th) are the major gainers among bowlers after finishing with five wickets each in their series played in Potchefstroom.

Meanwhile, South Africa captain Dane van Niekerk has dropped behind India’s Deepti Sharma in the list of all-rounders. Sharma is now at a career-high third place and with a chance to emulate or do better than her compatriots in an upcoming ICC Women’s Championship home series against England.

No India woman player has reached the top spot among all-rounders while former captains Jhulan Goswami (in July 2015), Purnima Rau (December 2000) and Shubhangi Kulkarni (January 1986) have all attained the second position.

The India-England series can be crucial in the final standings while defending champions Australia host second-placed New Zealand in another series that also starts on Saturday. England are on 10 points from nine matches and can jump to second or third place, depending on results of the other series.

Some highlights of the ODI rankings: