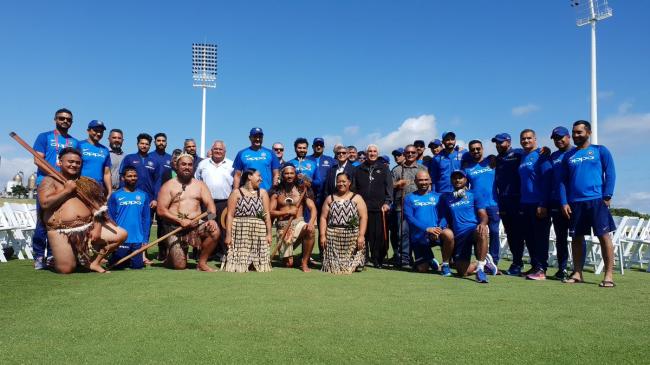 Bay Oval, Jan 25 (IBNS): The Indian cricket team on Friday received an unusual welcome as they assembled in Bay Oval for the second ODI of the series.

In fact, it was the members of the Maori Community who welcomed the Men in Blue to the Bay Oval in Mount Maunganui, creating an unusual experience for them to remember for a lifetime.

The community members performed a dance form known as powhiri.

The Indian cricketers posed with the community member for pictures as the images were uploaded on the official Twitter page of the BCCI.

FEATURE: #TeamIndia got a traditional welcome at the Bay Oval - something that the Men in Blue enjoyed before the start of the 2nd ODI - by @RajalArora

"#TeamIndia received a traditional welcome at the Oval Bay from the Maori community. Full video coming up soon on http://www.bcci.tv," the Indian cricket board captioned one of the images.

India (@BCCI) have officially arrived in the @BayofPlentyNZ.
Led by Rohit Sharma, the side received a powerful MÄori pÅwhiri from Ngai Tukairangi and Ngati Kuku, the manawhenua for the Bay Oval area ahead of tomorrow’s sold out ODI 2. #cricketnation #NZvIND #bayoval pic.twitter.com/vkRr3q9rmb