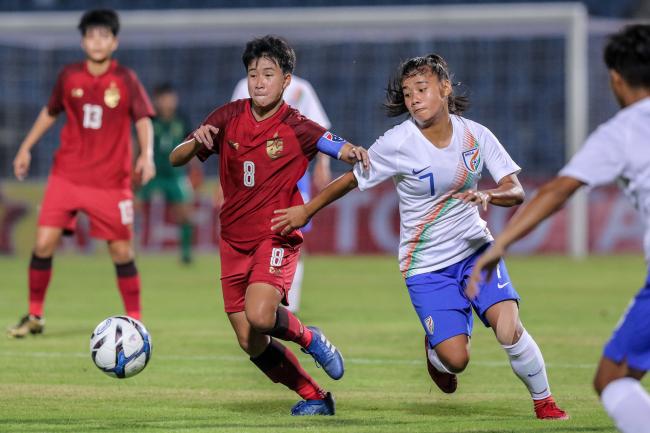 New Delhi, Oct 28 (IBNS): India completed an upset 1-0 win over Thailand, as a 36th minute goal by Grace Lalrampari gave them a momentous win that put them on level points with both Thailand and Nepal in their AFC U-19 Women’s Championship Qualifiers.

Despite this win, however, India could not make it through to the Round 2 of the Qualifiers courtesy of their head-to-head result against Nepal.

The game started off with both the sides creating fluid chances, though Thailand looked to keep the majority of possession. Although the hosts dominated possession, the Indian players worked hard to close down the gaps in the middle of the park.

The tactic almost paid off in the third minute, when Roja stole the ball on the left flank and played a give-and-go with Renu, before pulling the trigger from the edge of the area. However, her shot was weak and rolled wide of the goal.

India suffered a setback on the 12th minute itself, when Pakpi went down after a coming together of legs, and stayed down. She eventually had to be stretchered off and was replaced by Sanathokpi Devi in the right fullback position.

India’s swift closing down meant that Thailand were restricted to dead ball situations and long shots. However, that did not prevent them from testing India keeper Archana, who first fumbled a Kalasin free kick before it was cleared by Jabamani. Minutes later, she was tested again by 40-yard scorcher from the same player, but Archana managed to palm it away.

Around the half-hour mark, Thailand started to get better control of the game, using the flanks well to put crosses across the Indian goal. However, India managed to negotiate these attacks.

India’s dream moment came in the 36th minute, when Manisha powered her way down the left flank and crossed sent in an inch-perfect cross for Grace to tap it in. As things stood at this point, India would go through, by virtue of goal difference.

India kept playing on the break since then, but they soon had another good chance around the half-time mark. Renu hustled her way past two defenders to create a one-on-one chance out of a clearance from Sanathokpi. However, her low shot was aptly saved by Thai keeper Ponpimon.

The match continued much in the same vein in the second half, as India closed down the gaps, not allowing Thailand much space in the attacking third. Their first real chance in the second half came in the 69th minute, when Chatchawan made a wonderful run to run on to a through ball and sent in a low cross. However, Ratchaphan’s shot went well over the bar.

The pacey winger troubled the Indian defence a lot in the closing exchanges, as she broke into the box twice in quick succession. On the first occasion, her shot went wide, while in the second instance, it was saved by Archana.

At the end, however, India held on to the slender lead, with Archana making a couple of frantic saves in the closing exchanges.