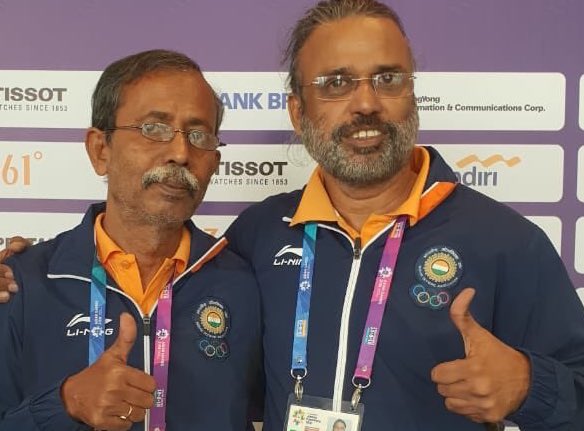 Kolkata, Sep 1 (IBNS) Fag end inclusion of the Bridge squad into the Indian contingent has proved huge beneficial to country's gold haul in the18th Asian Games
at Jakarta as Pranab Bardhan and Shibhnath Sarkar clinching the top honours in the men’s pair event on Saturday.

A former international bridge player Roy, who represented India in the World Championship, returned from Jakarta said their Bridge squad got approval from IOA into the Indian
contingent barely two days before the departure.

India won bronze in Men;s team and mixed team - six players each - in the debut sporting event at Jakarta.

Earlier on Saturday 60-year-old Pranab Bardhan and Shibhnath Sarkar (56) finished at the top after scoring 384 points in the finals. They beat Chinese pair of Lixin Yang and Gang Chen (378 points) and the Indonesian combination of Henky Lasut and Freddy Eddy Manoppo bagged the bronze scoring 374 here.

Another Indian pair of Sumit Mukherjee and Debabrata Majumder finished the ninth place with a score of 333.

Dey said the gold medal will surely lure many young people to come into the sport, which has not much patronage in India due to poor publicity.

He said while many young men of late started  playing bridge, but the number of women in India is few and far.

Dey hoped that now the bridge would come into limelight as chess was getting after Viswanathan Anand won the world championship.