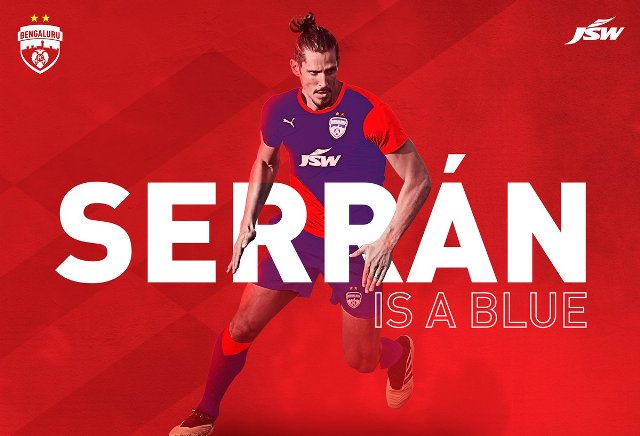 Bangalore, Aug 31 (IBNS):  Bengaluru Football Club, on Friday, announced the signing of 34-year-old centre-back Albert Serran, ahead of their Indian Super League campaign, set to kick off in a month’s time. A widely travelled defender, Serran joins the Blues as their seventh foreign signing, having turned out for Carles Cuadrat’s men in two pre-season friendlies, against Villarreal CF B and FC Barcelona B.

“It’s a great experience in my career to sign for Bengaluru FC. The pre-season in Spain was great and I had the chance to meet the staff and players. I was given a warm welcome and felt very good from the beginning. I’m expecting to arrive in Bengaluru soon, to know more about the fans and the city,” said Serran after completing formalities.

Born in Barcelona, Serran is a product of RCD Espanyol’s youth system and appeared in three La Liga games during his time with the Periquitos. In 2008, Serran signed a three-year deal with Swansea City, then in the Football League Championship. Serran left Swansea in 2011 and went on to play for AEK Larnaca, Alcorcon, Anorthosis Famagusta and Doxa Katokopia, before joining Albanian Superliga champions FK Kukesi in 2017. Serran’s most recent contract was with Morrocon side Chabab Rif Al Hoceima.

Having bowed out of the 2018 AFC Cup with a 5-2 aggregate loss to Altyn Asyr FK, the Blues prepare for their Indian Super League opener, against Chennaiyin FC, at the Kanteerava Stadium on September 30th.