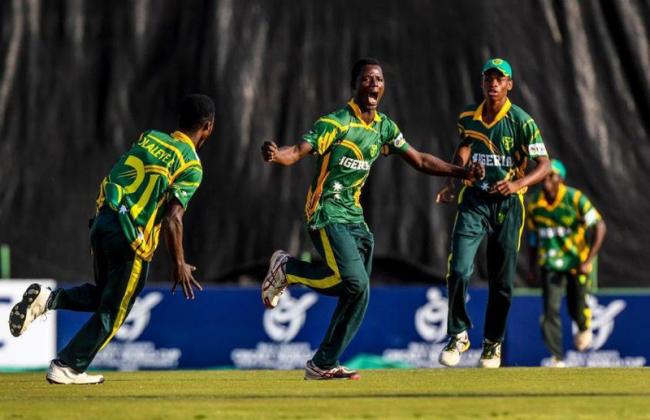 Dubai, Aug 28 (IBNS): Favourites Nigeria and Sierra Leone qualified for the final of the ICC Under 19 World Cup Africa Division Two Qualifier tournament, but they both got a major scare along the way.

Nigeria beat Tanzania by 35 runs, but they needed their final wicket partnership to rescue them from a massive hole. Yunusu Issa and Salimini Saidi took three wickets apiece to reduce the Super Eagles to 89 for nine.

It was a parlous situation, but Segun Ogundipe (62) and Igeanchukwu Uboh (23 not out) saved some serious blushes for the West Africans.

They took the total to 169, before Ogundipe was last man out, having given his team something to defend.

In reply, Tanzania became the second team to suffer at the hands of young Peter Aho, who took 4/37.


That ripped the heart out of the chase, and Isaac Danladi cleaned up the tail with three for 8, as Nigeria prevailed. Only Gokul Das, with 62, stuck it out, with Tanzania eventually all out for 134.

In the second match, Sierra Leone survived a Frederico Carava hurricane of wickets, to post a nervy 167 all out against Mozambique.

Carava recorded career-best figures of 7/33, which included three wickets in his second over, to see Sierra Leone tumble to 31/5 after eight overs.

It needed calm heads, and those were provided by Osman Sankoh (51) and Aruna Kainessie (40), who steered them to calmer waters. 167 was a lot more than they might have expected at 31/5 and then 122/8.

That saw Mozambique bowled out for 96, and sealed what looked like a comfortable victory on paper.

In reality, of course, Sierra Leone knew that they were pushed hard - for the first time in the competition - and their lower-order stood up to the challenge.

The tournament concludes tomorrow with Mozambique taking on Tanzania for the final qualifying sport in Division1. Nigeria play Sierra Leone for bragging rights at Senwes Park.