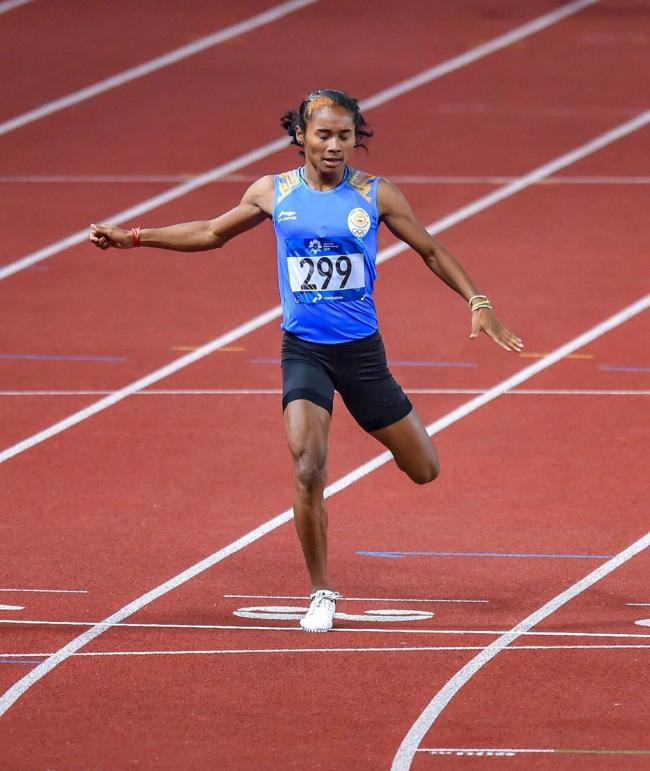 Guwahati, Aug 26 (IBNS): Celebrations have swept at the residence of Indian sprinter Hima Das at Dhing in central Assam’s Nagaon district after she clinched silver medal in women 400 meter race at the Asian Games 2018 in Jakarta.

Hima beat her own national record in two days as she clocked 50.79 seconds to win silver medal and she became the first Indian sprinter to run 400 meter under 51 seconds mark.

People of Dhing area gathered at Hima’s residence and witnessed the race on a big screen.

The locals and family members of the sunshine sprinter celebrated the winning moment by dancing, burning crackers and performing Naam-Prasanga.

Celebrations at #HimaDas's residence at #Dhing in central #Assam’s #Nagaon district after the #Indiansprinter clinched silver medal in 400 m race at the #AsianGames2018.

On the other hand, Prime Minister Narendra Modi congratulated Hima Das and said that “India rejoices in her glory”.

“One of India’s most admired athletes @HimaDas8 bags the coveted Silver in the Women’s 400m Final. India rejoices in her glory. Congratulations to her and all the best for her future endeavours,” the PM tweeted.

Virender Sehwag tweeted: "From 51.46 in Tampere to 51.00 in round 1 to 50.79 in the final, an absolute champion @HimaDas8 . Congratulations on the Silver and thank you for making us happy. Am sure Gold ab door nahi."

On the other hand, Assam Chief Minister Sarbananda Sonowal congratulated athlete Hima Das for making the people of the country proud by winning the 400 meter sprint silver medal at the ongoing Asian Games in Jakarta.

In a statement, the Assam CM said that, the Assamese youngster’s rare feat has delighted the countrymen and made them proud.

“Hima has elated the people of the country and the state with her achievements for the second time as she recently won the gold at the 400 metre final at the World U20 Championships in Tampere, Finland. Hima’s success is more remarkable as she broke the national record for fastest timing on her way to win the silver medal in 50.79 seconds. This is the result of the athlete’s great tenacity and her rigorous practice,” Sonowal said.

Sonowal also hoped that, Hima will be able to sustain her stupendous success in future as well and give the people of the country a reason to feel proud by consistently bettering her performances.

“Hima’s remarkable feats at the world stage would inspire the youngsters of the state to excel in the sporting arena and give a fillip to the sports scenario of the state as a whole,” Sonowal said.

Former Assam CM Tarun Gogoi tweeted: "I am proud of @HimaDas8 for setting new national record of 51s in women's 400m & qualifying for finals at #AsianGames2018.The state-of-art sports facilities we built for 33rd National Games in 2007 served as a beacon of hope for talents like Hima to prepare & overcome challenges."