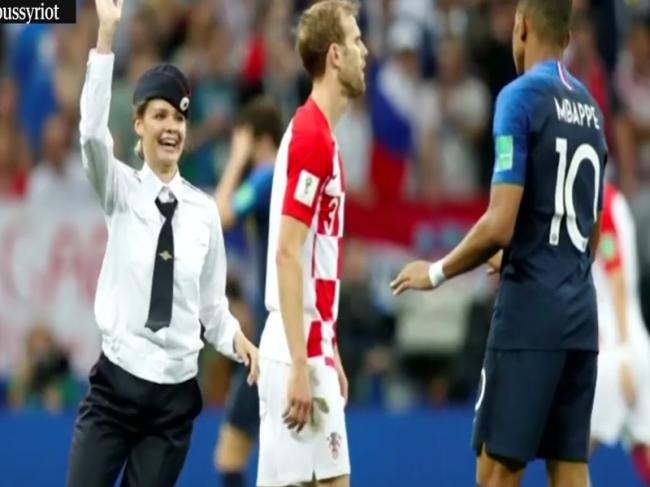 Moscow, July 17 (IBNS): Members of Russian feminist protest group Pussy Riot have been arrested for their intrusion into the football ground during the FIFA World Cup final on Sunday, media reports said.

The members have been imprisoned for 15 days and banned from attending sports events for three years.

The group tweeted to say: "Current situation: the 4 pussy riot members spent the whole night at the police station (note that there are no conditions to sleep, eat, take a shower etc) and are still there — going to be brought to the court. They are facing charges for administrative offenses so far."

In the early part of the second half of France-Croatia match on Sunday, the referee was compelled to suspend the course of the game for a while as few women- dressed in black trousers, white shirts and black ties- entered the field.

Later, in a video, which has been shared by The Guardian on Youtube, the members of Pussy Riot out-poured their anger against the Russian administration.

They said: "Dear friend, perhaps you know that there is no rule of law in Russia and any policeman may easily break into your life for no reason."

The group even claimed the Russian policemen's "good" behaviour during the World Cup will end once the tournament concludes.

"FIFA World Cup demonstrated really well how good Russian policemen may behave. But what will happen once it ends? The conclusion and the solution is the only one: you should fight for preventing fabrication of criminal accusations and arresting people for no reason."

In the last part of the video, Pussy Riot even alleged that there is no scope for everyone to contest elections in the country.

The group said: "In order for this to happen you need one thing called political competition. A possibility to participate in your own country's life and be elected. For everyone. All this are very simple things. But you should decide for yourself what you personally can do so that your Russia would become much more beautiful."

When Pussy Riot members stormed into the field, incidentally, Russian President Vladimir Putin was present at the Luzhniki stadium to watch the final match, which was won by France 4-2.

French striker Kylian Mbappe was even seen giving a high five to one of the women of the activist group.

Pussy Riot is a musical group based in Moscow.