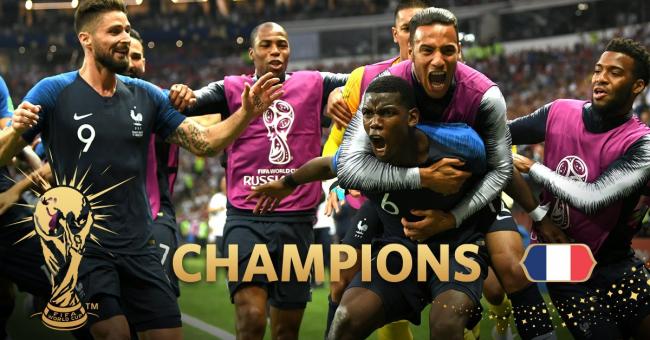 Paris, July 16 (IBNS): Six stations in the Paris metro have been temporarily renamed as a tribute to France's World Cup winning football players  as part of the country's preparations to welcome their heroes.

The recently crowned World Champions would ride an open top bus along the central avenue in the capital city on Monday to be greeted by the people on the road.

A thrilling final in Moscow on Sunday saw France blow away Croatia 4-2 to annex  their second World Cup after their victorious campaign in 1998.

But many places saw celebrations in the form of violence in cities like  Paris, Lyon, Strasbourg and Rouen where police had to fire tear gas shells and arrest the miscreants.
Bercy station was renamed  as Bercy Les Bleus and Charles de Gaulle-Etoile would change to "On a 2 Etoiles" (We've got 2 stars).

However, it wasn't just the Paris metro which saw  changes in names.

The Brussels station was renamed to, "Arts-Loi to Hazarts-Loi," with reference to playmaker Eden Hazard.
Belgium finished third in the premier competition.

In London, the Piccadilly line station was temporarily given the name, 'Gareth Southgate' after England finished fourth in the World Cup.

The Croatian capital of Zagreb too saw the people preparing  to felicitate  their country's heroes as they recorded their best-finish in  the World Cup.