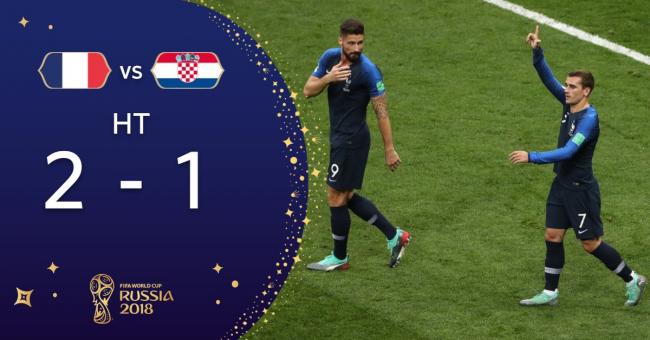 Moscow, July 15 (IBNS): France took a 2-1 lead against Croatia as the eventful first half of the final match of the World Cup ended here on Sunday.

Amid thousands of spectators inside the park and millions across the world cheering for the two sides, the final commenced with much excitement and thrill in the Luzhniki Stadium here.

Croatian fans were left heartbroken when own goal by Croatia’s Mario Mandzukic gave France early1-0 lead in the match.

It was the first own goal scored in a World Cup final.

However, the moment of disappointment for Croatian fans was shortlived as   Ivan Perisic scored the goal to level scoreline 1-1.

French were soon quick to take the lead once again after the 1998 winners were given a penalty as a result of VAR in the 36th minute of the final.

Antoine Griezmann scored the 38th-minute goal without a mistake as France went to the halftime with a 2-1 lead.

France won their first World Cup title by beating Brazil in their own nation by 3-0 margin in 1998.