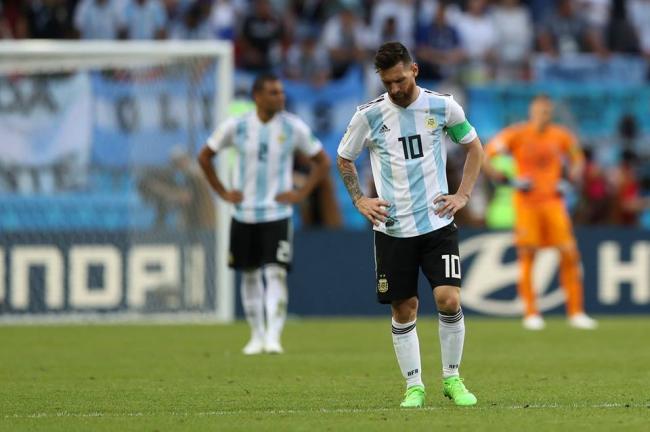 Kazan, Jun 30 (IBNS): Riding on their brilliant display of skills, France crushed Argentina's hope to make a progress in the FIFA World Cup 2018, ending a dismal journey of the Latin American team in the mega tournament at the Kazan Arena here on Saturday.

Though the first half of the match was evenly dominated, at least in terms of number of goals, France dominated the next 45 minutes, denying an inch of ground to their opponent.

France took an early lead in the match at the 13th minute when Antoine Griezmann fully utilised a penalty shootout chance.

Just four minutes prior to the end of the first half, Angel Di Maria brought Argentina back in the match with a stunning goal.

For the first time in the match, Messi rose to his reputation by assisting Gabriel Mercado who didn't miss the opportunity to score Argentina's second goal at the 48th minute, enabling his side to take a lead 2-1 in the sporting encounter.

However, Argentina's joy soon dissipated as Benjamin Pavard scored an outstanding goal at the 57th minute, equalising the score sheet.

France brought nightmare for Argentina as the former scored couple of goals in quick succession.

Both the goals were scored by Kylian Mbappe at the 64th and 68th minutes respectively.

At the 84th minute, Argentina could have made a comeback but Messi failed to seize a comparatively easy chance of scoring a goal.

During the injury time, Sergio Aguero scored the third goal for Argentina but it was all too late to avoid an elimination.

Argentina's journey was pretty ordinary in this world cup as the two-time champions could only manage a single win in the group stage to enter the last 16 of the tournament.

Despite a goal against Nigeria, Messi's performance was also under the scanner.

Win the win, France now moved to the quarter finals, one step closer to their possible second world cup victory.