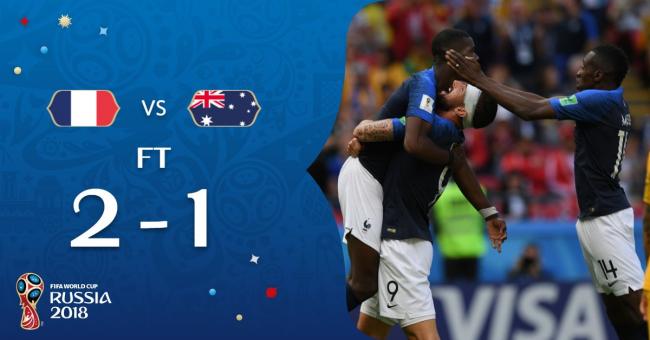 Kazan, June 16 (IBNS): The first World Cup penalty after a video review and a deflected Paul Pogba goal helped France in defeating Australia in their opening match of the World Cup here on Saturday.

It was Pogba's goal which helped in breaking the resistance put up by Australia across the match.

The video assistant referee penalised Australia's Josh Risdon for a sliding challenge on Antoine Griezmann and hence left France to score the first penalty of the grand tournament with an influence by the VAR.

It was, however, French defender Samuel Umtiti, who handled Aaron Mooy's free-kick, that gave Australia a chance to equalize in the match.

Mile Jedinak's penalty scored the equaliser for Australia as at that point of the match the scorecard read 1-1.

It was later in the 81st minute of the game that Pogba scored the second goal for France to ensure a victory for the 1998-World Cup winners.

Giving hopes of creating more excitement in the field,

both teams will be back in action on Thursday 21 June, when France take on Peru while Australia will be under pressure against Denmark.