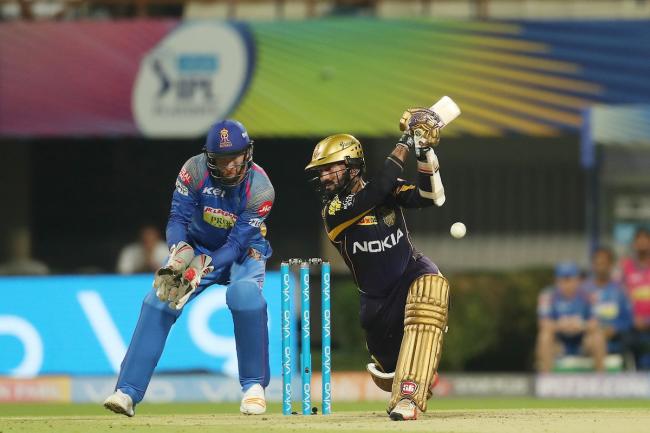 Kolkata, May 23 (IBNS): A combined batting effort by skipper Dinesh Karthik, Andre Russell and Shubman Gill helped Kolkata Knight Riders (KKR) to set 170 as target for Rajasthan Royals in the eliminator match of the 11th edition of Indian Premier League (IPL) at the Eden Gardens here on Wednesday.

On a day when Kolkata failed to get a start from Sunil Narine, who was bowled out in the second delivery of the innings after hitting a boundary, it was the couple of partnerships in the middle overs which enabled the home team to pose a challenging total against Rajasthan.

In 3.4 overs, Kolkata was reduced to 24/3 when Karthik walked out to the crease and once again rescued his team from a possible batting collapse, which was witnessed against Mumbai Indians at the same venue.

Karthik, who reached 50 in 35 balls, was a part of two crucial partnerships- one with Shubman Gill (55 runs) and other with Andre Russell (29 runs)- to take his team to a safe position.

Though Gill was caught behind by Heinrich Klaasen in the delivery of Ben Laughlin (2/35) for 28 (17), Karthik kept his heads down and kept fighting with Windies all-rounder Russell.

When Karthik went out for 52 (38), an innings which was crafted with four fours and two sixes, it was Russell who shifted his batting to the fourth gear.

An unbeaten knock of 25-ball 50 helped the home team to race way to 169. Russell entertained the Kolkata fans with three fours and five sixes.

Krishnappa Gowtham had the best bowling performance for Rajasthan. He picked two wickets for 15 in three overs.