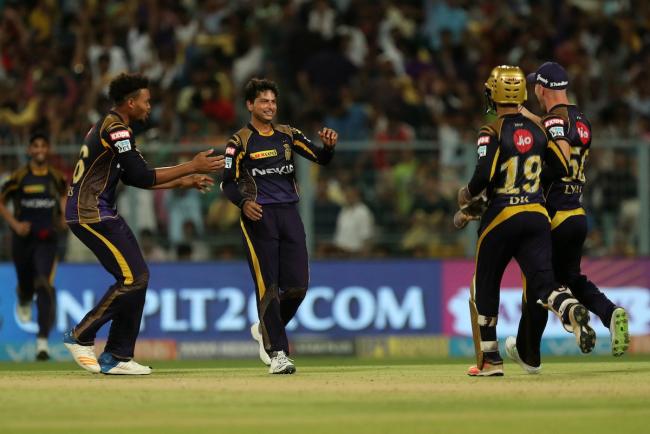 Kolkata, May 15 (IBNS): Kuldeep Yadav’s four wickets and a clinical batting by Chris Lynn and skipper Dinesh Karthik helped Kolkata Knight Riders to beat Rajasthan Royals by six wickets in a must-win match for both sides in the 11th edition of Indian Premier League (IPL) at the Eden Gardens here on Tuesday.

After Kuldeep’s four wickets for just 20 runs, Chris Lynn’s steady innings of 45 runs and Karthik’s unbeaten 41 helped Kolkata to reach the target of 143 with two overs to spare.

Though Lynn was dismissed by English all-rounder Ben Stokes, who picked three wickets for 15, it was skipper Dinesh Karthik who guided his team to score 145/4 in 18 overs.

Sunil Narine began Kolkata’s run chase in his own style by scoring 21 in the first over, but also had to sacrifice his wicket while intending to go for big shot.

Narine, who smashed two fours and two sixes in the first over bowled by Krishnappa Gowtham, was caught by the latter in the second over of the match which was delivered by Stokes.

Narine, who scored 21 off 7, was followed by vice-captain Robin Uthappa (4) and Nitish Rana, who was dismissed leg before wicket at 21 by Ish Sodhi, reducing the total to 69/3 in 8.2 overs.

Even before Kolkata land up themselves in a spot of bother, Karthik partnered Narine’s opening partner Lynn to steer the home team towards victory.

Earlier a disciplined bowling by Kolkata bowled out Rajasthan to just 142 in 19 overs.

Kolkata skipper Dinesh Karthik’s decision to invite Rajasthan to strike the ball first was taken a beating as the visitors started off their innings with some aggressive shots.

Though Shivam Mavi began his bowling spell conceding just two in the first over, Rajasthan openers- Jos Buttler and Rahul Tripathi- topped the Kolkata bowling unit by piling 47 runs in the next two overs of the innings.

While Tripathi smashed Krishna three fours and a six in the second over, Buttler went for four fours and two sixes in the following over, which was bowled by Mavi.

Kolkata had to wait till the fifth over, which was bowled by Andre Russell (2/13), when Tripathi (27 off 15) was dismissed caught behind by Karthik.

Slowly establishing a control in the match, Kuldeep Yadav (4/20) picked Rajasthan skipper Ajinkya Rahane (11) and Buttler (39 off 22), who was stumped by Karthik, in the eighth and ninth overs respectively.

Buttler’s dismissal was followed by the continuous fall of wickets, enabling the home team choke Rajasthan in the death overs.

Kolkata are presently at the third positon in IPL standings with 14 points while Rajasthan are a place behind with 12 points.