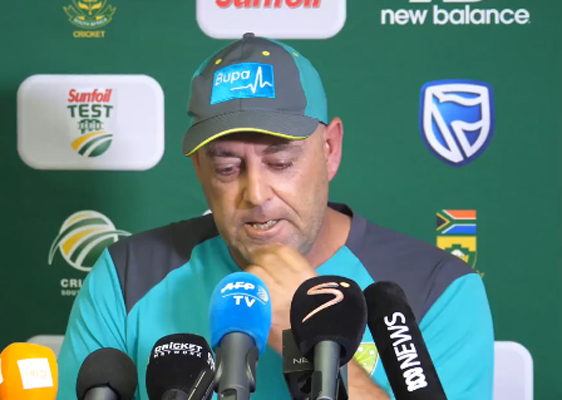 Canberra, Mar 29 (IBNS): In a shocking development, Australian men's team coach Darren Lehmann on Thursday stepped down from his position, just hours after former captain Steve Smith addressed an emotional press conference where he took charge of the ball-tampering scam on his own shoulder.

Steve Smith and ball-tampering scam hit Cameron Bancroft earlier in the day faced the media after returning to Australia and later it was Lehmann who announced that it was time for the national side to get the service of a new coach.

On an almost unbelievable day for our team, here was how coach Darren Lehmann resigned. WATCH MORE: https://t.co/SVlt3QLMVq pic.twitter.com/RUKCCc9Ok7

Crcket Australia on Wednesday declared that Lehmann had no knowledge of the scam and maintained that he would be continuing as the coach of the national side.

However, Lehmann stepped down and said in a statement: "I just want to let you know this will be by my last Test as head coach of the Australian cricket team as I’m stepping down."

"After seeing events in the media today with Steve Smith and Cameron Bancroft, the feeling is that Australian cricket needs to move forward and this is the right thing to do," he said.

Away from serving as the coach of the national side, Lehmann had earlier in his playing career represented Australia in international cricket for several years as a player.

He said: "I really felt for Steve, as I saw him crying in front of the media, and all the players are really hurting."

“As I stated before I had no prior knowledge of the incident and do not condone what happened. But good people can make mistakes," Lehmann said.

“My family and I have copped a lot of abuse over the last week and it’s taken its toll on them," he said.

“As many who sit in this room will know life on the road means a long time away from our loved ones and after speaking to my family at length over the last few days it’s the right time to step away," he said.

Lehmann said he was responsible for developing the culture in the team.

“I’m ultimately responsible for the culture of the team and I’ve been thinking about my position for a while," he said.

An emotional Darren Lehmann on his proudest moment as coach pic.twitter.com/NhX08swrst

“Despite telling media yesterday that I’m not resigning, after viewing Steve and Cameron hurting it’s only fair that I make this decision," he said.

With tears rolling down his cheeks, former Australian skipper Steve Smith, who has been handed a 12-month ban by Cricket Australia after his name emerged in the ball-tampering scam, said he will regret the episode for the rest of his life.

Taking all responsibilities, Smith told media: "I made a serious error of judgement and I can understand the serious consequence."

"I don't blame anyone. I'm the captain of the Australian team. It's on my watch and I take responsibility for what happened last Saturday," he said on the recent ball tampering incident which hit Australian cricket hard and left millions of fans shocked across the globe.

"I will now regret it for the rest of my life," an emotional Smith said.

Smith, who repeatedly broke down during the conference, said the entire episode left him 'devastated'.

He was banned for a Test by ICC after the entire ball tampering episode came to light during the recently concluded third Test match against South Africa.

South Africa defeated Australia in the third Test to go up in the series 2-1.

Smith and David Warner, his deputy, were handed 12 months ban from playing international cricket by Cricket Australia on Wednesday.

Cameron Bancroft, who was caught red-handed during the act, said on Thursday he will regret his involvement.

"I want to say that I am very sorry," Cameron Bancroft told the media after reaching Australia.

"I love the game of cricket and playing for my nation and my state there is no greater pride for me.

“I am extremely disappointed and regret my actions," he said.