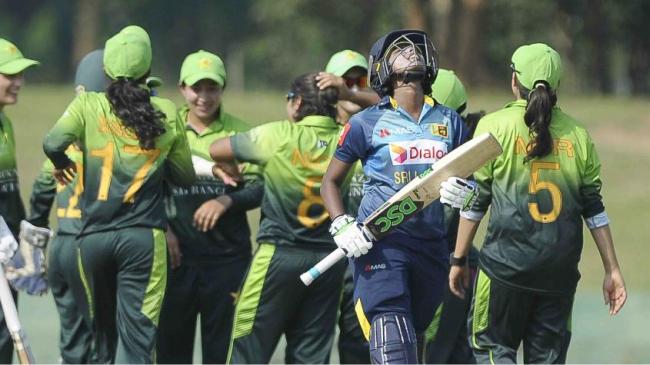 Dubai, Mar 25 (IBNS): Pakistan captain Bismah Maroof was elated after a crushing 3-0 victory in an away series against Sri Lanka but said her players were looking to “polish” their skills as they prepare to take on stronger teams in the ICC Women’s Championship.

Pakistan’s impressive performance has lifted them to third on the Points Table with eight points, two points behind New Zealand and Australia after the end of their second round matches. England and South Africa have played only one series each and will face off in England from 9-15 June to complete the second round of the championship.

Australia defeated India 3-0 in a recent away series while New Zealand had the same score-line against the Windies at home in the eight-team competition, which is the pathway to the next ICC Women’s World Cup in New Zealand in 2021.

Pakistan captain Maroof said that though she was happy with how the team played in Dambulla, the series did not mean there was any kind of relief for the side, especially since they next play Australia.

“We know that it is the second round of the championship and there are big hurdles to cross in the coming months. These points are very crucial for us and we are putting in our best to maintain the stride. We’ve improved immensely on the batting side. The bowling gave us important breakthroughs that cultivated a field for us to win,” she said while praising batters Nahida Khan, Muneeba Ali and Javeria Khan and spin bowlers Sana Mir and Nashra Sandhu.

“Australia is a very strong team and to give them a strong competition we are pushing ourselves really hard.  We are polishing our skills on all ends, from bowling to fielding, to long partnerships. We are also working to hold our nerves in times of crises, since half of cricket I think is a mind game. Once you win here (mind), you win there (field). We will do our best to make the most of Sharjah's conditions and to carry the confidence we have earned in this series,” she added.

For Pakistan, former captain Sana Mir was the pick of the performers with two four-wicket hauls in the series that have propelled her to the top of the table for bowlers with 17 wickets in six matches, having taken seven in the preceding series against New Zealand which the team lost 1-2 in Sharjah.

Sri Lanka have drawn a blank in their first six matches and now have the challenge of taking on India in a bid to open their points tally.

Sri Lanka captain Chamari Athapaththu: “We couldn’t perform to our potential and expectations. We are very disappointed with the way we played. We have to bounce back strongly to get a good position in the points table as evidently we are not up there. It’s going to be an important challenge as we will be playing a strong team and will also be looking to improve our position on the table. We have to improve in all three departments – specially our batting.”

Defending champions Australia are in a strong position because their 10 points have come against the finalists of last year’s ICC Women’s World Cup and captain Meg Lanning is now looking to seize the opportunity against Pakistan.

Australia captain Meg Lanning: “It was a really strong series from us. We came over, playing against a really strong side like India, who have some really talented players, so we were looking to start off well and the most pleasing thing was we could carry our form from the home series (against England) and make a big statement, so overall a very positive series for us.

“We’ve played two of the very strong nations in England and India, we’ve come away with five out of six wins, which I think is a very good effort. We’re starting to really establish our style of play and Pakistan are improving all the time, and playing in their home conditions I guess, that’s going to be another chance for us,” said Lanning.

For Australia, Alyssa Healy smashed a belligerent 133 in the last match as the side capped the series with a massive total of 332 for seven, the highest against India and their third highest ever. Among bowlers, left-arm spinner Jess Jonassen was the pick of the lot, grabbing six wickets in the series to move up to number one position in the MRF Tyres ICC ODI Women’s Player Rankings.

The losing teams have had their bright spots but India’s one-sided loss at home was a setback for the World Cup runners-up and captain Mithali Raj said the team was now looking to garner every possible point in upcoming matches.

India captain Mithali Raj: “From the tour to South Africa we have got four points but we haven’t managed to get even two points from the series against Australia (but) we still have other teams to go (play against). Now whenever we play against other teams it will be important for us not to lose out on any games, because we couldn’t get even two points in this series.

“We will definitely look for a clean sweep to get six points (in the next series) against Sri Lanka. It becomes very important that whatever ICC Championship matches that we play (from here on) against other teams to aim and play for those points since we have lost out on six points (against Australia) and we lost two points in South Africa,” said Raj.

For India, left-handed opener Smriti Mandhana smashed two half-centuries in the series played in the western Indian city of Vadodara and has a tally of 350 runs in the championship, next only to Devine.

New Zealand are ahead of Australia on net run-rate and the 3-0 win over the Windies was the culmination of a fine all-round effort led by tournament’s leading scorer Sophie Devine who now has a tally of 428 runs including two centuries.

New Zealand captain Suzie Bates: “It was a close win in the first game and got better, the coaching staff has been good at asking more of us and making sure we stick to our game-plans regardless of the situation of the game.

“It was a brilliant game today (last match), we have talked about it all series, to make sure we finish off the batting performance when we get good starts, today was probably the complete performance that we were looking for. We set the batting up and then Sophie and (Anna) Peterson got us to 300 which we have been asking of this group and then the bowlers were outstanding and took the wickets which they have done all series,” she said about the side’s 205-run win in the last match.

It was a big setback for the Windies as they had beaten New Zealand 3-0 in the last cycle of the championship and had started this cycle with a 3-0 win over Sri Lanka at home.

Windies captain Stafanie Taylor: “It’s a tough loss and it’s hard to say you can take much from here but it is a learning experience. In all three areas – we did not bat, bowl or field as well as we would have wanted. New Zealand outplayed us in all three games.