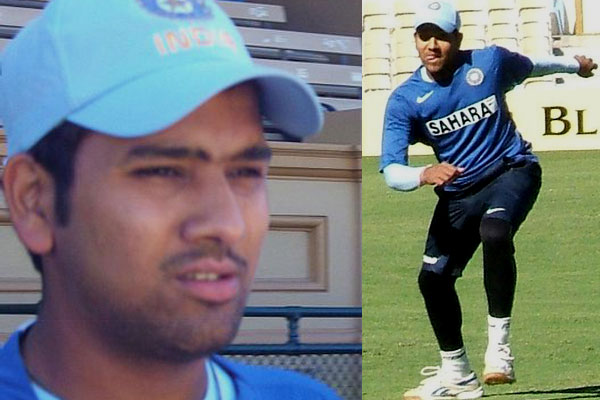 Mohali, Dec 13 (IBNS): India defeated Sri Lanka by 141 runs in the second ODI match of the series to level it 1-1 here on Wednesday.

In reply, Sri Lanka posted 251 runs for the loss of eight wickets.

He hit nine boundaries and three sixes in the innings.

Rohit Sharma, Indian captain for the Sri Lanka series, on Wednesday dissipated the opponent bowling attack with a mesmerising double hundred, third in his career, enabling his team to bounce back from an embarrassing defeat in Dharamshala.

India, riding on his knock, posted 392 runs for the loss of four wickets.

Rohit's innings in Mohali will be his third best ODI innings after 264 and 209 against Sri Lanka and Australia respectively.

Rohit, who started off his batting on Wednesday slowly, accelerated his innings right after scoring his hundred to help India post a humongous total of 392 for the loss of four wickets in 50 overs.

Despite losing the toss on a cloudy morning in Mohali, both the openers, Shikhar Dhawan and Rohit Sharma, went off to a good start.

Dhawan, continuing his good form, has hit another 50. He left his partner while batting at an individual score of 68.

Dhawan's departure may have given a respite to the Sri Lankan bowlers after a 115-run partnership for the first wicket, but the visitors had to fight hard to get the second breakthrough in the innings.

Rohit partnered young Shreyas Iyer to form another partnership, keeping a strong hold on the game.

Iyer, who was going after the bowlers right from the beginning, was looking good to hit a hundred but fell short of 12 runs from his maiden century.

By the time Iyer departed, Rohit magic had already started.

Shifting to the fourth gear, Rohit punished all bowlers universally by sending balls out of the parks. He has hit 13 fours and 12 long sixes.

Mahendra Singh Dhoni and Hardik Pandya made small contributions to the Indian scoreboard, which was largely dominated by Rohit.

Sachith Pathirana had the best bowling figure for Sri Lanka who conceded 63 runs to pick up three wickets.