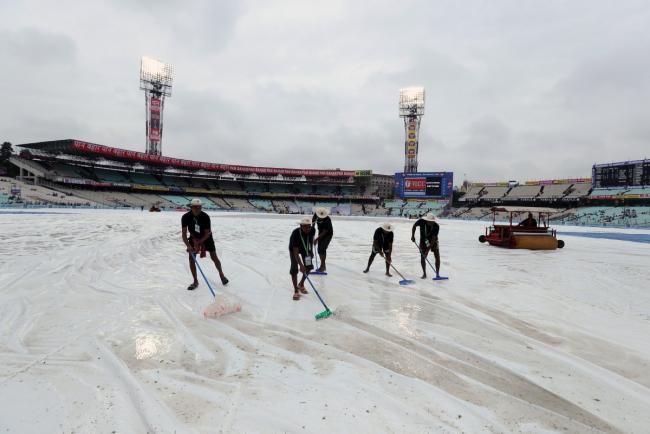 Kolkata Test: Play for Day 2 called off due to rain, India 74/5 at stumps

Kolkata, Nov 17 (IBNS): The second day's play of  the Kolkata Test between India and Sri Lanka has been called off due to rain with the hosts struggling at  74/5 at the stumps.

Only 21 overs were bowled at the Eden Gardens on Friday.

In yet another rain-marred day, India had struggled to score 74/5 at the end of the first session on Day 2 as the Sri Lankan bowlers have dominating the match so far.

Commencing the second day at an over night score of 17/3, India lost two more wickets in the form of Ajinkya Rahane (4) and Ravichandran Ashwin (4) as they were reduced to 50/5 at one point of time.

Cheteshwar Pujara is fighting a lone battle in the innings, who has scored a steady 47 (102) so far. Pujara failed to get any support from the other end till wicket-keeper batsman Wriddhiman Saha joined him.

Local boy Saha, who has survived 22 balls without losing his wicket, scored six runs with the help of a boundary.

The unbeaten partnership between Pujara and Saha of 24 runs is the highest in the match so far.

While Suranga Lakmal was the Sri Lankan bowler who had rattled the Indian top order batting on Thursday, it was the turn of Dasun Shanaka to disarray the middle order.

Shanaka took wickets of Rahane and Ashwin early in the morning to hurt India even more.

Sri Lanka on Thursday won the toss and elected to bowl against India.