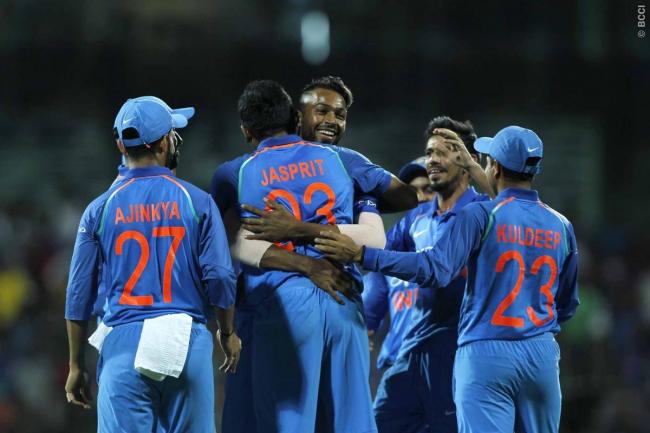 India batted first and posted 281 runs for the loss of seven wickets in 50 overs.

Australia were given a revised total of 164 runs to win n 21 overs.

Apart from Glenn Maxwell (39), the rest of the Australian batsmen failed to get the momentum needed to reach the target.

Indian cricketers made a stunning comeback to post respectable 281 runs for the loss of seven wickets in the first ODI match against Australia here on Sunday.

India were earlier reduced to 3-11 and it was Kedar Jadhav (40), Hardik Pandya (83), MS Dhoni (79) and Bhuvneshwar Kumar (32) who made significant contributions to recover the innings.

It was Nathan Coulter-Nile and his initial lethal bowling that left Indian top order completely disturbed.

He completed the innings with an impressive figure of 3-44. He even picked up the wicket of Kohli.

Kohli was dismissed at duck and it was Glenn Maxwell who took a blinder catch to show the Indian skipper the door towards the pavilion.

Pandya played a sensible knock of 66-ball 83, smashing five boundaries and sixes, to help the side recover with MS Dhoni playing the role of the anchor at the other end.

He smashed four boundaries and two sixes in his innings that remained another important knock by the former captain under pressure.