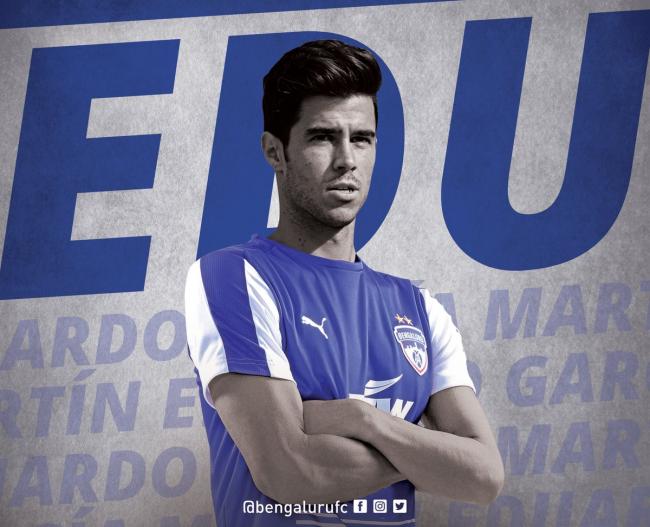 Having penned a one-year deal, Edu becomes the eighth overseas player and the fifth Spaniard in the squad for the Blues’ maiden season in the Indian Super League.

Head Coach Albert Roca welcomed his fellow countryman to the Blues’ fold and said, “Edu is an exciting young winger.

His versatility down the flank will provide us with great options in terms of personnel as well as our game plan. He will be a great addition to our squad and fits in well with our philosophy.”

Twenty-seven-year-old Edu, who joins the Blues from Spanish side Real Zaragoza, shared his excitement ahead of his first overseas stint, “I’m very excited for joining the club. From the first time, I liked the idea of playing for Bengaluru’s team in the Indian Super League. Football in India is growing a lot and it’s an important challenge for me. I hope I can help the club to reach the objectives for the season. I can’t wait to start!”

Born in Zaragoza, Edu joined his home side Real Zaragoza’s youth setup in 2002, aged 12. He progressed through the ranks at the club before making his debut with the reserves during the 2009–10 campaign, in Tercera Division.

In 2012, Edu joined CD Ebro before moving to fellow league team SD Ejea the following season. In July 2014, he returned to Ebro and scored career-best 16 goals during his first season, helping his team gain promotion to Segunda Division B, before adding a further eight in his second season.