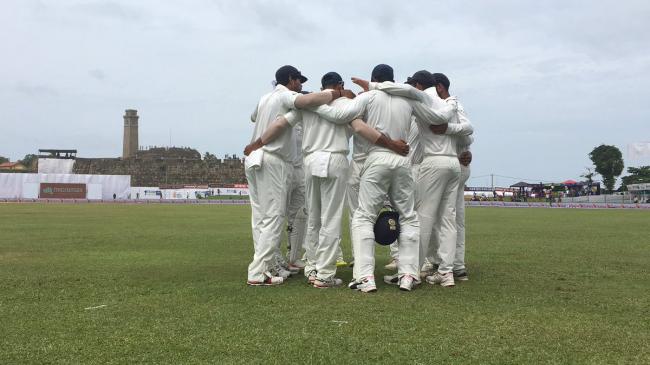 That's it. A comprehensive victory and #TeamIndia take a 1-0 lead in the series #SLvIND pic.twitter.com/gTJKnWneMH

With this win India took 1-0 lead over Sri Lanka.

Chasing 550 for victory, Sri Lanka were bowled out for 245 runs.

Dimuth Karunaratne remained the top scorer for the home side with his 97 runs knock.

He smashed nine boundaries in the innings.

Rangana Herath and Asela Gunaratne could not come down to bat for the visitors due to injury.

Indian spinners-Ravindra Jadeja and R Ashwin- shined with the ball as they picked up three wickets each.

Indian captain Virat Kohli scored his 17th test hundred which helped the team to set a 550 runs target for Sri Lanka on Saturday.

In the second innings of Galle test, India scored 240/3 till they declared taking a lead of 549 runs on day 4 of the match.

Kohli remained unbeaten at 103 (136) when the innings was declared.

Apart from Kohli, Abhinav Mukund played a knock of 81.

Earlier in the first innings, Sri Lanka were bowled out at 291 in reply to a mammoth total of 600 by India.