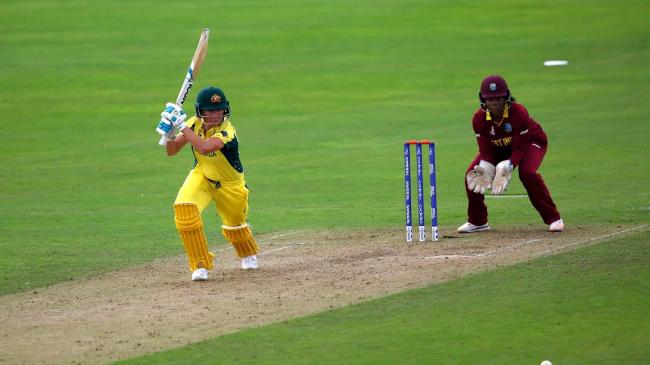 India Blooms News Service | | 26 Jun 2017, 10:43 pm
#WomenWorldCup, #Australia, #WestIndies
London, June 26 (IBNS): A near-perfect bowling and batting display laid the foundation for Australia as it got its ICC Womenâ€™s World Cup title defense underway with an eight-wicket victory over the West Indies in Taunton on Monday.

Ellyse Perry took three wickets, while Jess Jonassen and Kristen Beams picked up two each as the West Indies was dismissed for 204 in the 48th over in a repeat of the 2013 final.

The six-time world champion dominated the chase too, knocking off the target with 11.5 overs to spare as Nicole Bolton stole the show with a graceful century, while Beth Mooney made 70. Bolton’s 116-ball innings included 14 fours, while Mooney hit seven fours and a six in her 85-ball innings.

“When we were out there that it felt like we were in a dream,” said Bolton, who was later adjudged player of the match.

“To share an opening partnership like that of 171 is special, we didn’t play the scoreboard but instead the way we normally play, tried not to put too ourselves under too much pressure.

“It was a pretty damaging partnership, there was a period where it kicked into gear for me – I was mindful of getting the job done but the closer I got to a century the more the nerves kicked in.

“It was a pretty special feeling, the result is exactly how we want to play as a team and the bowlers played a massive part in that.”

Accurate line and length was the focal part of Australia’s bowling effort, in particular from Megan Schutt with two early maidens, with the pressure resulting in debutant Felicia Walters spooning to square-leg.

Hayley Matthews (46) and Chedean Nation (39) began the rebuild, though both fell to spin, the latter going to Beams who picked up two for 30 from her 10 overs.

That brought captain Stafanie Taylor and Deandra Dottin together, with Dottin showing her usual spark to ignite some impetus with six boundaries in her 29, while her captain made 45 in the anchor role.

Perry, who had earlier uprooted Dottin, then repeated the trick to Afy Fletcher late on as the ICC Women’s World Twenty20 India 2016 winner was bowled out for 204.

A fourth consecutive half-century for Mooney led Australia’s chase, with Bolton following her to the half-century from 73 balls. Reaching their milestones allowed the two to open up, orchestrating some wonderful shots down the pitch as Bolton in particular freed her arms for some glorious stroke-making.

Mooney fell for 70, bowled by Taylor, while Matthews took a stunning catch to dismiss Meg Lanning but Bolton’s chanceless innings finished with her third century as Australia eased home.

Taylor said: “It’s not the start we wanted, there were a couple of mistakes that we made but we just need to go back to the drawing board.

“We have more games coming up so we can use this as an example. We didn’t bat well, we had a platform but the middle order didn’t push on to get us to that total.”