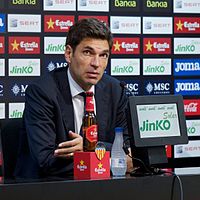 The club said the 45-year-old has agreed a three-year contract.

He will join the club next week.

Vice Chairman (Football) Les Reed was quoted as saying by the club website: “I am delighted that after a diligent selection process we have recruited Mauricio Pellegrino as our new First Team Manager."

Mauricio Pellegrino told the website: “I am really happy to become the new coach of Southampton Football Club. The club has a great reputation for having a strong and stable structure, competing in the Premier League and playing attractive football."