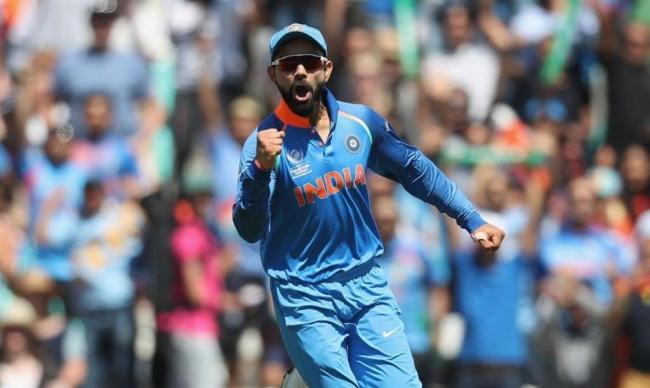 Everyone wants to see an India-England final: Virat Kohli

India Blooms News Service | | 13 Jun 2017, 09:26 pm
#ViratKohli, #India-England, #ChampionsTrophy, #IndianHighCommissioner, #London, #MSDhoni
London, June 13 (IBNS): Indian captain Virat Kohli on Monday said that everyone wants to see an India-England final in the Champions Trophy 2017, as his team will take on Bangladesh in the semi final, in couple of days time.

Kohli made the comment while the entire Indian team was invited by the Indian High Commissioner in London, on Monday evening.

While speaking about the semi final, Kohli said: "It doesn't matter whom are we playing in the semis. League phase is the toughest in this kind of tournament. Now we have the opportunity to win one game and enter the final."

India and Pakistan are the two teams from Group B which have been qualified for the semi finals.

While India will take on Bangladesh in the second semi final, Pakistan will face the last time runner up England on Wednesday.

Though the Indian captain is not much preoccupied with the thought of playing the final of the Champions Trophy, he said: "If both the teams (India and England) end up well playing good semi finals, people might just get what they want to see (India-England final)."

Last time in 2013, both India and England played the final of the Champions Trophy where the men in blue out-shined the English boys.

"Hopefully we will reach our second final in a row, which was led by MS (MS Dhoni) so beautifully last time and just try to do whatever I can in my little ability to take the team forward," the Indian captain said.

India won the title back in 2013 under the leadership of MS Dhoni, while Kohli is leading the team for the first time in any ICC tournament, after taking the charge of the team.

The evening where all the players of the team were present, former Indian skipper Mahendra Singh Dhoni recounted his memories in London.

Calling the city to be "amazing", Dhoni said: "Overall I loved the bus journeys across the city. It has been a pleasure to come here. I have both good and bad memories here."

Though Dhoni won the Champions Trophy in 2013 in England, he too had worse memories as a captain when India were white washed by the English team in a test series, back in 2011.

Indian High Commissioner in London, Y K Sinha said: "My wife and I delighted to invite all members of the Indian team for the evening which is going to celebrate India-UK cricketing ties. We are grateful to the Indian cricket team to find some time amid such a busy schedule to join us to celebrate the link between India and UK."

Media reports suggested that the reception was marked with the launch of 'Cricket Connects' exhibition in London.

Reliving his playing days, Indian coach and former legendary spinner, Anil Kumble said that he had some wonderful memories of playing county cricket here, along with the international matches that he played for India.