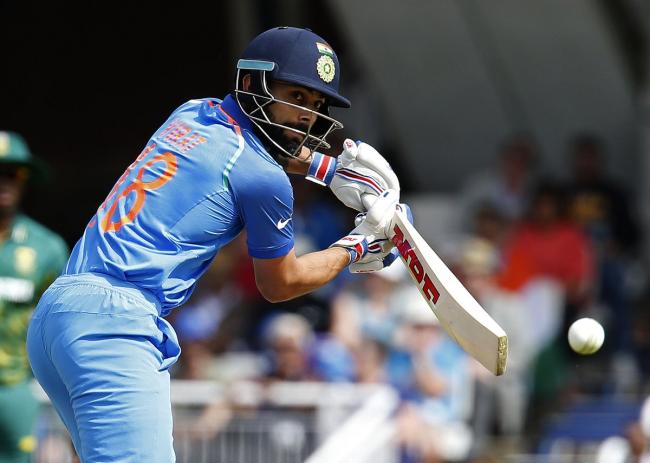 The semi-final seat was at stake and hence the winner of the match was ensured a position in the top four spot.

South Africa needed to pick up quick wickets to give them a chance to win the match.

However, Indian batsmen kept things in their grips and never let the opponents get a chance to turn table around in the high-voltage Sunday encounter.

Shikhar Dhawan continued his good form the match against Sri Lanka and scored 78 precious runs and even added 128 runs in the second wicket partnership with skipper Virat Kohli (76*) to move close to victory.

As the duo went closer to 192, Imran Tahir provided the break to South Africa and dismissed Dhawan.

Dhawan smashed 12 boundaries and a six in the innings.

Kohli, on the other end, returned to form, though looking a bit uncomfortable at the early phase of the innings, but went ahead to remain unbeaten at 76 runs.

Kohli and Yuvraj Singh (23*) ensured India reach the winning score of 193 runs and help their side capture their seat in the semi-finals.

In the semi-final, India will face other Asian team Bangladesh.

Bangladesh has created a significant impact in the tournament as they defeated New Zealand and showed them the door towards exit from the 50-over mega ICC event.

South African bowlers could not deliver on Sunday's clash.

Imran Tahir and Morkel only picked up a wicket each.

Indian bowlers used the conditions perfectly to put some extra pressure on the South African batting line-up right from the beginning of the innings.

South African openers, however, provided the side a strong start as they put up 76 runs for the first wicket partnership.

Quinton De kock (53) and Hasmim Amla (35) started playing some shots freely when R Ahswin, who returned to the squad after sitting outside for the past two matches, clicked and picked up the wicket of Amla.

After De kock departed, Amla did not last longer and it was the other spinner Ravindra Jadeja who picked up his wicket to reduce South Africa to 2-116.

Three run outs changed the course of the match for South Africa.

AB de Villiers (16), David Miller (1) and Imran Tahir (1) got run out to put pressure on the South African batting which struggled on Sunday.

It was AB de Villiers' wicket which hit the number one side in the world quite hard as they could not recover properly.

Faf du Plessis could not add to the start he got and was dismissed for 36 runs.

At the end, it was Bhuvneshwar Kumar who picked up two back-to-back wickets of Rabada (5) and Morkel (0) to finish things off for South Africa.

It was Tahir's (1) wicket that bundled up South Africa for 191 runs.

India bowlers recovered strongly after being defeated by Sri Lanka in the ICC Champions Trophy match on Thursday.

England,Bangladesh and India have qualified for the semi-finals of the tournament.

The match between Sri Lanka and Pakistan will decide the fourth side to reach the final-four stage of the tournament.

India defeated Bangladesh in a practice match ahead of the start of the Champions Trophy.